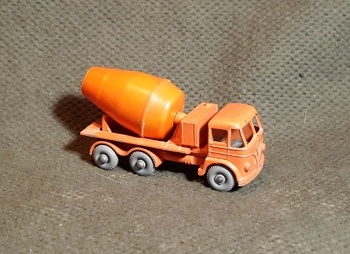 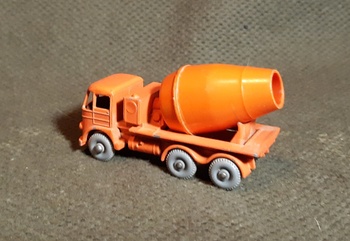 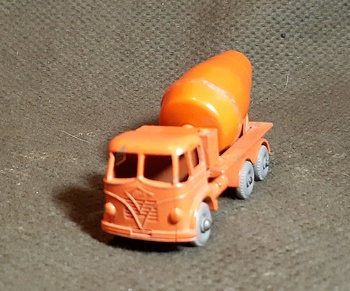 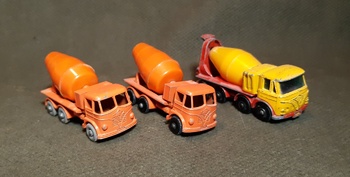 I have posted the black wheels version earlier now for the exciting grey wheels version! It is from England so going with the English Spelling. Also the American name for this would be a Cement Mixer.
The Foden Concrete Truck was in the catalog from 1961 through 1967. It came with grey wheels in 1961, 1962 and 1963. While that is 3 years vs 4 years for the black wheels there were much fewer made in the early years. More were probably made in 1967 than all the other years combined. Not exactly sure on that but it is close enough and I think one gets the idea. This is the fine tread version of the grey wheel as opposed to the knobby. version.
By 1967 Matchbox technology had become much more advanced and it was reimagined as the version seen in photo #4 which is a bit larger with windows plus a concrete drum that rotates as it rolls. Still this grey wheels version has it charms. There was also a smaller ERF Concrete Truck that proceeded it. Same color but much smaller. The original models were meant to fit in an actual matchbox (they didn't really quite fit) so were much smaller.
Next week will be mighty military Matchbox Monday so stay tuned to this Bat Channel!