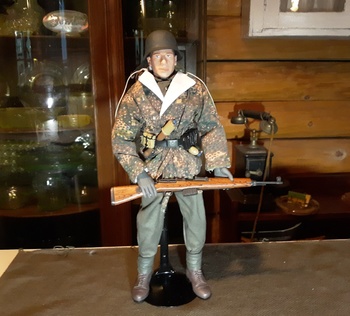 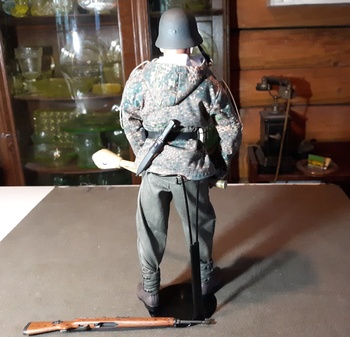 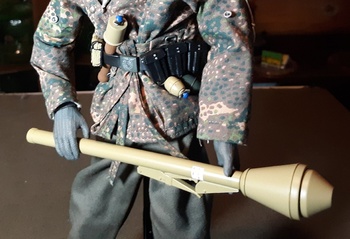 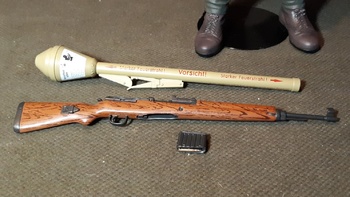 This poor guy has been in his box since 2000 and I just freed him last month. I would have posted him sooner but Smokey the oft hidden cat knocked his rifle on the floor. Then the detachable magazine dethatched and it took three weeks to find it. You can see it in the last photo under the rifle. It even has bullets.
Volker (that is his name) is a Panzer Grenadier from the eastern front in 1945. The panzer grenadiers usually travelled with tanks aka panzers. Tanks are rather blind and it is handy to keep infantry with them.
Originally grenadiers threw grenades and Volker has three. Two egg grenades and one potato masher. Those aren't the official name but I need to go to bed in an hour or so and to type out the names would take several hours. He has the Gewehr 43 as his rifle. This was a semiautomatic rifle in the caliber of 7.92 the standard German rifle cartridge. It is a semi-automatic weapon with a detachable 10 round. Looks a bit like a larger SKS. Finally he has a Panzerfaust. It wasn't as huge a threat to tanks as one would think. I believe 1-2% of tanks were taken out by panzerfausts. It was dangerous to use as tank crews machine gunned all the bushes those who were using the panzerfaust would hide behind.
The camo frock is reversible and is white on the inside. Turn it inside out and perfect for snow.
This is a 1/6 figure so it would be generically known as GI Joe. Although not actually a GI Joe that is the term for any 1/6 scale military figure.