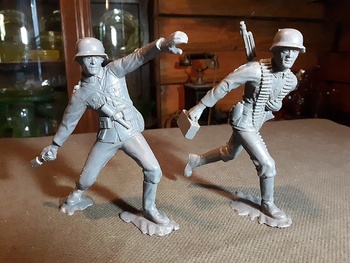 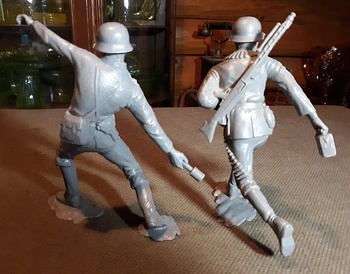 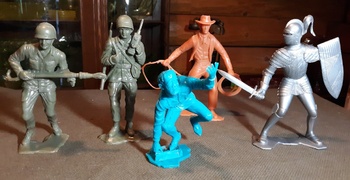 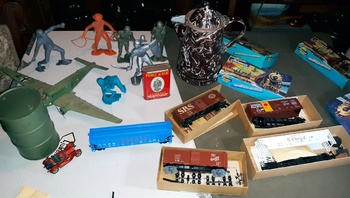 In Roman numerals as that is how Marx Toys dated their figures. On these it is one the underside of the base. This would be when the figure was first released or some sort of modification made or because they felt like it. I recall learning about Roman numerals in school and this is the only reason I have found to know this. Not counting the Roman coin dated MCVII BC I bought.
These are believed to have been sculpted by Jos. Ferriot & Associates. Bill Lemon sculpted the others aside from the US Marines.
As can be seen these are well detailed with excellent suggestion of movement aka animation. They are also very 3 dimensional. Cheaper toy soldiers are in poses easier to mold that end to be in a flat pose such as firing an arrow, rifle or standing at attention. These figures have legs and arms not all on the same plane (as in geometry).
OK who do we have here. One is throwing the famed potato masher grenade and the other has the famed MG 42 with a can of ammo. The machine gun was the base of the German platoon. All the other members of the platoon carried ammunition or other such for the machine gun. The US M60 is based on the WWII machine gun and is still used. Potato masher grenades not so much.
Free bonus pics of my Long Beach finds from last weekend and some other 6" figures yet to be posted.