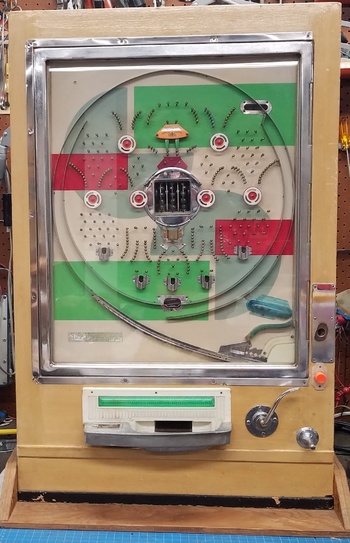 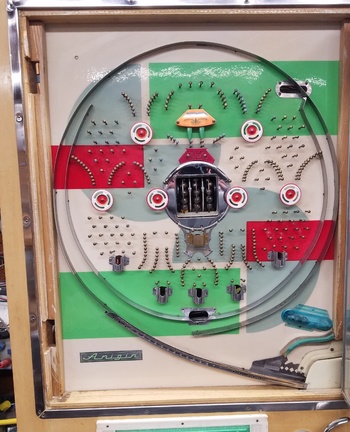 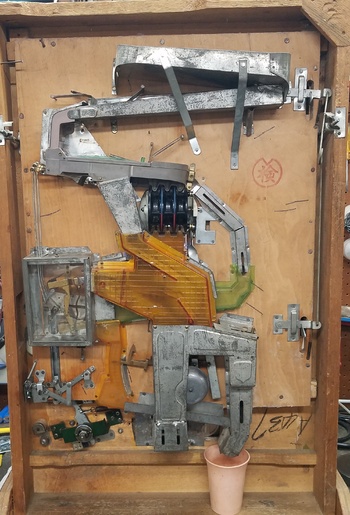 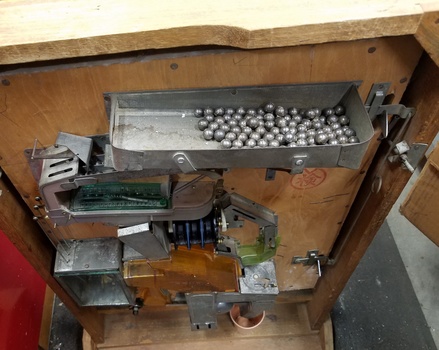 This machine has been in the house since I was a little kid. I believe that it was made in the 50s or 60s. My mother was Japanese and I was told the story of my uncle who was married to a yakuza boss's daughter and had several Pachinko parlors in Japan. But this appears to be a home model.

I did see there was another Anigin model posted on CW about 10 years ago. Can't seem to find any information on this company.

One of the interesting features of this model is, the orange button. When you run out of balls, you hit the orange button and it acts like a payout giving you a small handful of balls. The different pay slots will give you different amounts of balls depending on the difficulty of the slot. There is also a small ashtray next to the payout slot.

For years I thought that the little cup in the back that catches the balls was just put there. But my research shows these are original.

It's been sitting in the bar for a decade or more. So I finally moved it into the workshop to clean it up. Of course I had to test it ..for several hours. I had lubed everything up and cleaned it up as best I could for the moment. In the future it will get a deep cleaning.

I first tested it by dropping balls into each of the pay slots, and every one worked. But I noticed as I continued to play it, that it wouldn't pay out properly. Over the years my niece and nephew have played with it while getting babysat by Grandma. I figured out there was some smaller steel balls that were not Pachinko balls. These were causing it to jam.

PACHINKO
Pachinko is a type of mechanical game originating in Japan and is used as both a form of recreational arcade game and as a gambling device, filling a Japanese gambling niche comparable to that of the slot machine in Western gambling.

Pachinko machines were first built during the 1920s as a children's toy called the "Corinth game", based on and named after the American "Corinthian bagatelle". Another likely inspiration was the Billard japonais, 'Japanese billiards', invented in Western Europe during the 18th century.

The Game of Life Classic Reproducti...
$36