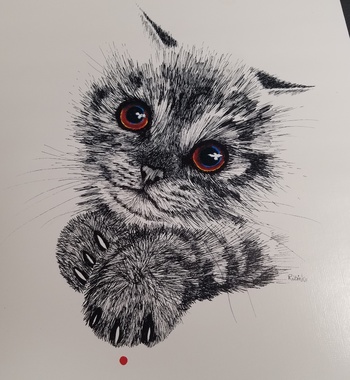 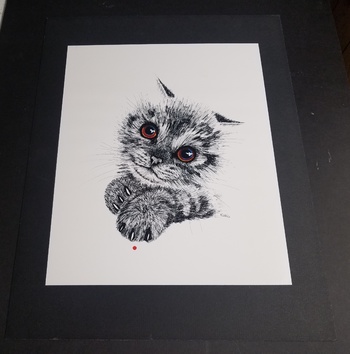 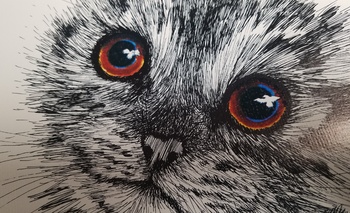 This one is interesting and historic so pay attention and read on.

There is a tiny spot of damage above the head, about 1/8" but it's hard to see. This is a very rare print, so it does not bother me.

RABINDRA DANKS & THE BEATLES
Pop Artist Rabindra Danks was born in Glasgow Scotland. Danks, who played the guitar (in The Playboys), as a curtain-raiser act for the Beatles' European tour in 1961, held shows in 1974 in Europe, combining his artworks with musical performance. He is a recording artist, author and visual artist. Danks was also involved in the production of "Sesame Street" in New York. He wrote short musical videos and wrote songs for animated cartoons.

From his bio on his site, he says he also opened for The Rolling Stones.

He had tiny galleries at 6727 1/2 Hollywood Blvd. Hollywood, California, and also at 130 Del Amo Fashion Square in Torrance, CA, in the 1970's, and sold everything from signed, framed lithographs to notecards to mass-produced, unsigned prints. Most had an amimal theme, and were primarily line art using multiple, thin, black lines to create textures. He would sometimes introduce limited colors, but also made a few full-color drawings like his "Animal Fun Car."

He used the name "Rabindra" from his attraction to the Hindu culture. The red dot represented a Hindu good luck symbol, and was sometimes the only color on the drawing.

Other notes: When Kenny Pavel left The Playboys to play for Cliff Richard's Drifters, he was replaced for a while by 16-year-old Jimmy Page, future guitarist of Led Zeppelin.