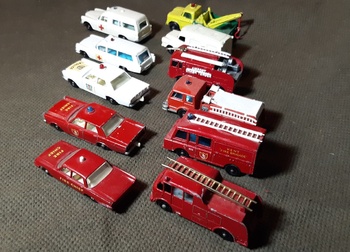 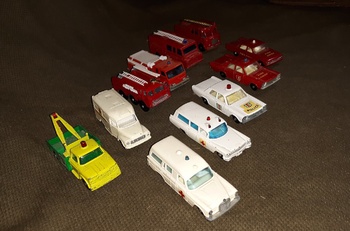 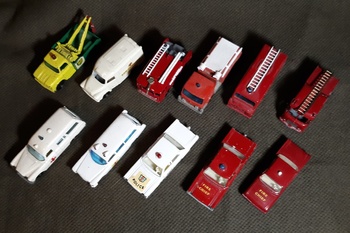 As Matchbox cars often get in accidents emergency vehicles are very important in a Matchbox collection. The models here are from the mid to late 1960sMost of these would have been in a 1968. The smaller Fire Chief and Merriweather Fire truck models were not as they were early models and the Mercedes Ambulance was introduced in 1969. There were more emergency models made than shwon here but I could not get to them all and there are other I do not have. There were three versions of the Fire Chief car and I only have two and I am missing 2 of the police cars. One missing and one I don't have. Plus a few wreckers aka tow trucks couldn't make it tonight. Tow trucks are one of the most important of Matchbox emergency vehicles. Most Matchbox models have a bit on the underside for the tow truck hook.
Fire vehicles of course are the most numerous. The Fire Chief car goes in the lead and the others follow behind along with an ambulance. The fire convoy is a standard in Matchbox play. It is so important Matchbox made a fire station. The only other building they made was a service station.
Not sure what is coming next week but I am sure it will be quite exciting.