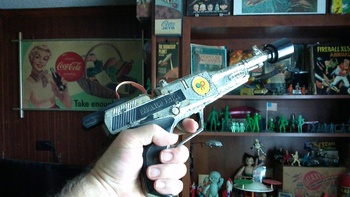 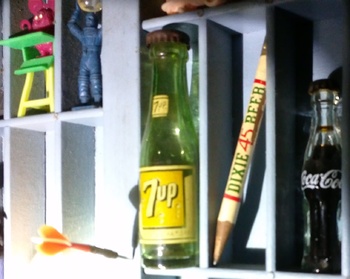 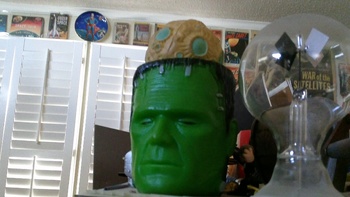 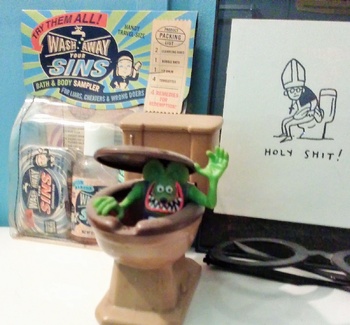 My well-played-with "Hamilton's Invaders" Grenade Pistol from REMCO!
The exact same modeling and cap-firing design was used and reused by Remco for years!
It started out in 1963 as the Monkey Division Okinawa Pistol, molded in all-olive drab.
Around that time, Irwin Allen was having props made for a new TV show called "Lost in Space".
He had his people buy a bunch of the guns and tweak them slightly so they could hold lights and a battery pack!
They were used on the show as their main weapon for years!
"Hamilton's Invaders" were a pair of giant pull-string-operated bug creatures resembling mutated spiders that menaced a little blue plastic army and their Monster Tank & helicopter!
They used the gun design in 1965, giving it a new reflective all-chrome finish and, of course, new trademarked badging which consisted of a round full-color sticker and a plastic or cardboard insert featuring the toy's current affiliation above the trigger, which, along with color variations was always the only different element of the design for ALL of these incarnations!
The first one I ever BOUGHT was the last reuse in 1968!
In an interesting kind of inter-genre cross-pollinational cosmic joke, it finally became the Star Trek Rocket Pistol!
Molded in black and a swirly, metallic, almost psychedelic dark blue, it came packaged in a box with a photo of Leonard Nimoy as Mr. Spock cut & pasted to look like he's actually firing a rocket grenade on the front!
An officer from Star Trek using a Lost in Space Laser Pistol is for me a priceless image!
Those REMCO box graphics were ALWAYS exciting!
-
Tiny 7up salt shaker, 1950s. A DIXIE 45 pencil from the 1950s, A 1973 Tiny Coca-Cola bottle filled with REAL COKE! and a 1952 Tom Corbett Space Cadet taking off his bubble space helmet!
-
The head of The Frankenstein Monster! ...as a 'can cozy'!
Still, it's one of the most detailed and beautiful sculpts I've ever seen on a vinyl accesory!
-
Rat Fink on the crapper?
NO!
Rat Fink IN THE CRAPPER!
This figure is from the "Rat Fink & the Rad Rods" toy line licensed by Kenner in 1990.
Maybe he's trying to wash away his sins with some of the items behind him! 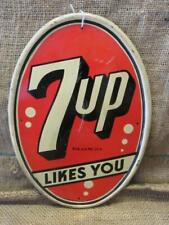 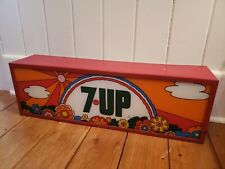 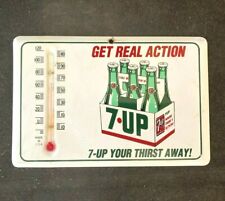 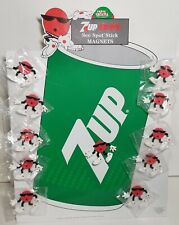