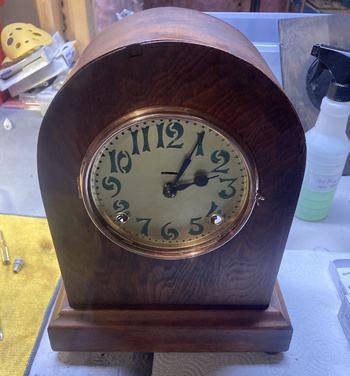 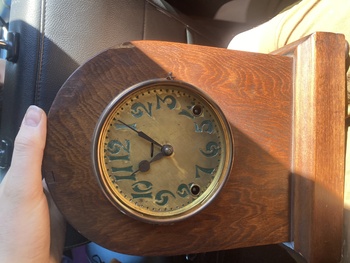 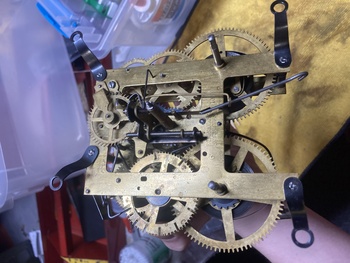 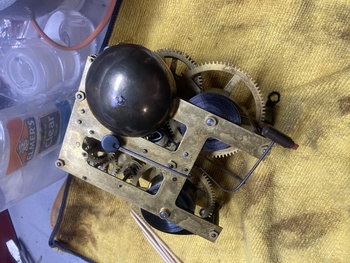 Here is a new clock I picked up for $22 at the same place as the clock from my previous post. I had been walking around the store when in the corner of my eye, I spotted this lovely gem. I waited for the small area to clear out of people completely oblivious to anything but the records which were stacked on either side of the clock. Upon first glance, i suspected that the clock was just another boring modern day battery powered clock from the late 20th century, but it turned out to be quite the contrary. The case had no markings, of a makers mark and/or past maintenance, e.t.c. And there was clear evidence that damage had occurred to the case, and repairs had been done. Not only was the glass on the dial door missing, but the door was a completely different color metal than the dial itself more of a copper color rather than brass. I also noticed there was various chips all over the veneer, but besides these few imperfections, I decided to buy it. I decided I was going to restore this clock for my grandparents. The restoration will involve re-veneering the whole case, and refinishing it, and figuring out how to get a new piece of glass for the door. I tested the movement when I first got home with it, and sure enough, it lasted about two minutes every time i set it, and then ceased to tick. I removed the movement and saw the movement was labeled ‘E. INGRAHAM CO.’ With the numbers 6 and 10 on either side of the plate (respectively) which I assumed means June of 1910. After removing the movement I proceeded to cleaning the movement and inspecting it for damage as best I could. I used an extremely minute amount of all purpose three-in-one oil on a que tip on the back plates of the movement, and on some of the gears and gear barrels which had a slight bit of surface rust on them. Afterwards I wiped off all the 3 in 1 oil and disposed of the access. I was fully expecting the oil sinks to be full of old dirty grimed oil, but I was surprised to see that the sinks were completely bone dry. I was not sure why this was the case, but im hoping maybe you guys could give me some answers. I proceeded to purchase Horace Whitlock’s complete synthetic oil kit, and Proceeded to apply plenty of oil wherever I could find a place to on the clock. (Meaning the oil sinks and bushings) after all this, I put the movement back in the case, set it, adjusted it, and let it run. To my surprise, the clock was running perfect once again, chiming the hour and half hour right on time. Now it is just a matter of the case. Thanks for looking!

Mystery:
1. Did Ingraham manufacture cases like this one, or was this case hand made, and the movement most likely taken from another clock?

2. Why did the clock not have any oil in the oil sinks? Is this a good sign? Bad? Is there any special maintenance that should be done to help the movement after it running dry for so long?

Any and all assistance in this mystery is appreciated. Thanks!