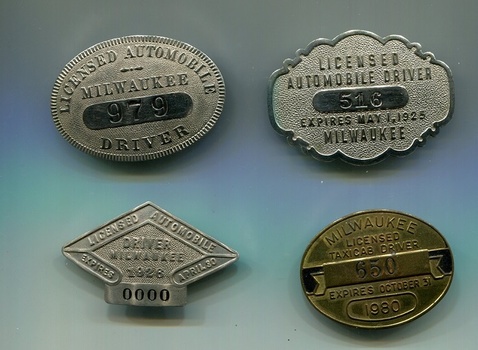 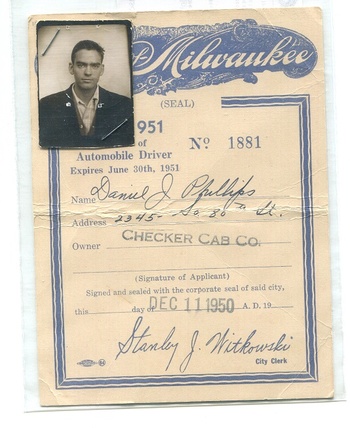 Most states licensed taxi drivers and issued license badges in the past. A few states like Wisconsin failed to take advantage of this taxation opportunity and left it up to cities like Milwaukee. Milwaukee started licensing taxi drivers in 1913. The license came in the form of an undated “Licensed Automobile Driver” badge. The undated badges were issued from 1913 to 1923 and are surprisingly rare considering their high 3 digit numbers. The 1924 badges were the first dated versions. Instead of having just the year, the badges are dated as “Expires May 1, 1924” to reflect Milwaukee’s “fiscal year” rather than a calendar year. The expiration date was changed to April 30, in 1928 and to June 30, in 1932 and remained unchanged until the last date,1980, when the expiration date was set at October 30th. The badges are nickel plated bronze and changed shapes every year. This continued until 1943 when due to war time shortages, the alloy was changed from the nickel plated bronze to zinc, similar the 1943 Lincoln cent coins. In 1960 the license title was changed to “Licensed Taxicab Driver” and remained as such until 1980; the last year that badges were issued. For most of those years the badges were brass with soft enamel colored high lighting. Sometime by 1950 paper licenses with attached photos were issued along with the badges. By now I would expect that the licenses are modern plastic id. cards.