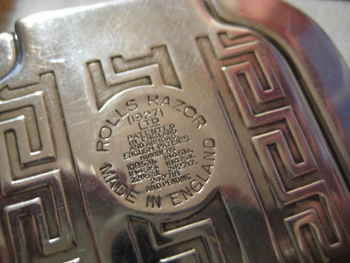 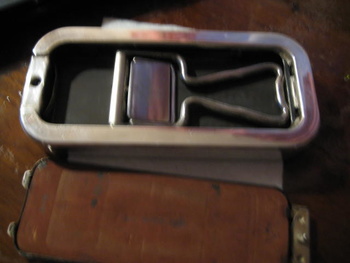 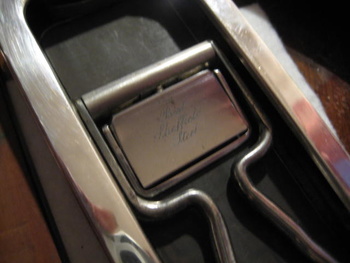 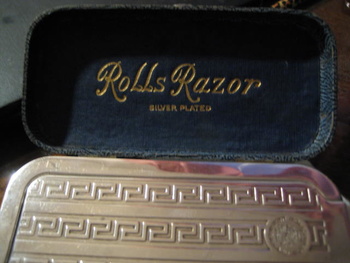 A brief history of the Rolls Razor (taken from Wikipedia)
The Rolls Razor was made by a British company that also sold washing machines. The razors were made from the early to mid 1900's, and there were several models made.
This is the oldest Rolls Razor model - it carries a 1927 patent date, though it may have been made a little earlier than that. The cases in this model were made of brass, and were usually silver-plated and sometimes (rarely) gold plated. I have as silver plated one. They came in several boxes, depending on the price.

The information below was found at : http://shavenook.com/showthread.php?tid=3674
It is a safety razor that is based on a segment of a wedge straight razor, that's fitted with a safety bar and is held by a handle. There were several of these adaptations of straight razors to safeties that came into the market in response to Gillette's invention of the safety razor. They all had reusable blades that were honed/stropped like straights.
The Rolls Razor differed from the others in that it came in a case designed to allow a user to touch-up and strop the blade within the case itself.
Imperial has a nice short handle that can only be stored on the stropping handle.
Opened, you can see the different parts of the razor itself. The grey thing on the right is the hone. The other cover is seen on the bottom of the case and it shows the brown strop. These covers are not interchangeable. In the middle, you can see the blade, held in the stropping mechanism with the stropping handle. The knurled rod is the razor handle itself.
The mechanism is really cool. When you remove the honing cover, and the handle, you can use the stropping handle to strop the blade by quickly moving it back and forth in the case. The blade flips automatically at the end of each stroke and is moved in a stropping motion (edge trailing).
If you place the honing cover back on an flip the case, you can remove the stropping cover, and then the same back and forth motion moves the blade over the hone in a homing motion - edge leading. Very ingenious. 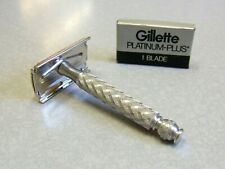 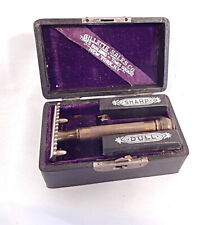 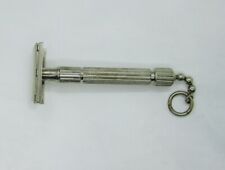 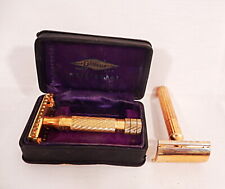