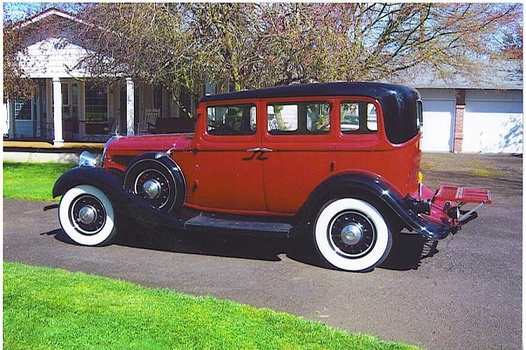 In 1959 Joe a Mechanic at a truck shop said " I notice that you are interested in the old 33 Studebaker,why don't you buy it for $125.00" I told him that I was making payments on a new Chevy,and couldn't afford it. A couple years had went by, we were married and I often told my wife about it,and wished that I had bought it. At that time Joe didn't know who the new owner was,or what He did with it. One day in 1963 I was driving about five miles from where I first saw the car,and there was a sign along the street that said 1933 studebaker $125.00 as I walked to the rear of the house,I couldn't believe my eyes ,this was the same car .I ageed to buy the car with a hand shake,and would get a loan ,yes get a loan, it was in 1963. After buying the car I drove it home in the rush hour traffic, with out licenses,and insurance but not until the cats had bailed out a back window. It has been mine for over 48 years,and I had decided to restore it lately. It's name is "Orville" Everything is done except the bumpers not being chromed yet. Note:the paint job---"loftbed"was the painter