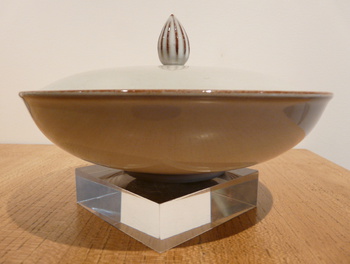 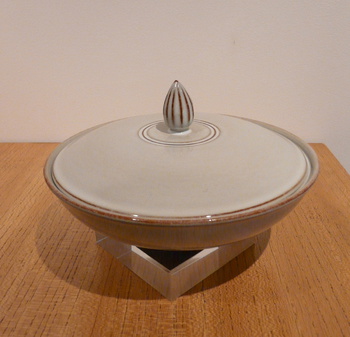 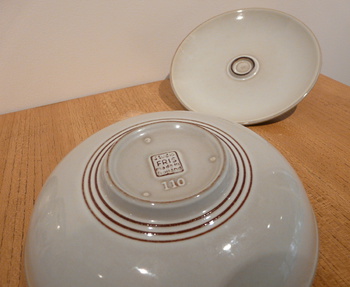 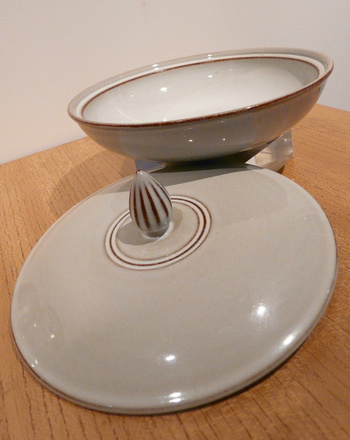 I found this bowl and cover at a market here in Sydney a few years ago.
I was attracted by the simplicity and elegance of the design.
Recently I've learnt that it may be a 'chocolate box'.
I especially liked the finial and the colour was attractive in itself.
It is a fine representation of the period called "Nieuwe Zakelijkheid" translated as New Objectivity or New Pragmatism, a Dutch phrase for Modernism. It follows Bauhaus principles where colours were not allowed to lay stress on ceramics or distract from the model/shape.
It has an impressed mark: Studio Fris Made in Holland.

"Decoration is 'useless, unpractical and diverts the attention’."

The Aardewerkfabriek Fris began in Gouda but moved in 1947 to Edam at the old Fokker factory works. The artistic director was (Willem Hendrik) W.H. de Vries., but there were other designers too of post-war domestic wares including Nel Bruynzeel, Dick Gerrits, Hannie Terpstra, Emile Truyen, Jan Lucassen en Floris Meydam. The factory closed in 1969 after having obtained an important position in the post-war pottery market.