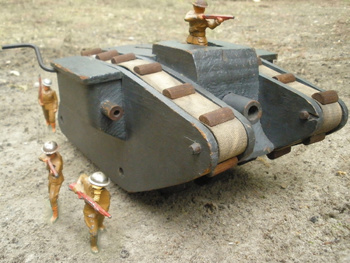 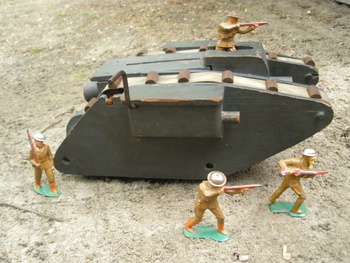 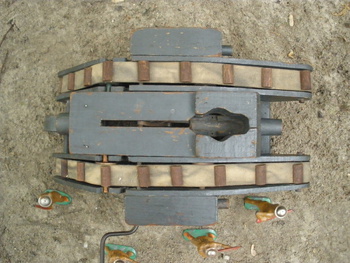 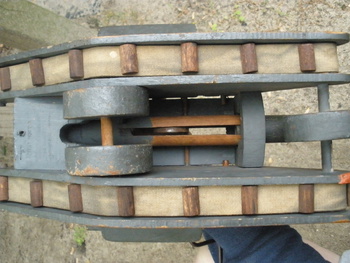 Getting this was a personal accomplishment for me; I saw one of these for sale a while back and thought it was going to be mine. Then, at the very last second, someone else swooped in and snatched it up. I was heartbroken! It took a year of waiting and searching for one of these for me to finally be able to get one. My patience pay off at least, this one is missing way fewer parts than the other one and the maker information on the bottom is much clearer (every word is legible).

Who says good things don't come to those who wait?

This colossal juggernaut of a war machine is one of the coolest things! 14" long, all wood construction, canvas treads with little wooden "tracks". It has a metal crank that powers the spring cannon mounted centrally to the hull (unfortunately that spring is one of the only things missing). Of the FOUR of these tanks I know about, the spring is either lost or broken on three of them. I'm going to contact the AAF Tank Museum (again) because they have an example of it that appears to be in good condition. The spring must have been mounted in an unusual and precarious way (held on by two finish nails at most!). My favorite part of it is that, when it is pulled along the floor, the tracks actually move with the tank!

Probably made in the early post-WWI period, the stamp on the bottom says that it was "Manufactured by Harley Co. Springfield Mass." Can't find anything about the company. The jump to motorcycles is something that comes to mind, but THAT Harley has nothing to do with Springfield as far as I know.