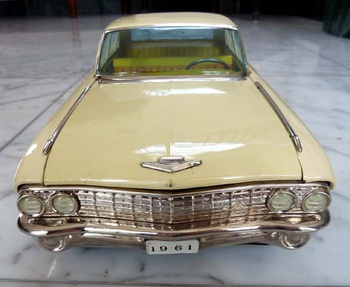 This large and heavy tinplate toy was made by the Japanese company SSS of Tokyo in 1961. It is a model of a "Fleetwood Sixty Special" as indicated on the box.
SSS stands for "Shibuya Seisakusyo".
The toy is 17" long and weighs nearly 6 lbs. The detail is excellent for a friction powered toy. Both the hood and trunk open, and there is a tin representation of an engine with a plastic air filter and a radiator fan that is driven by the friction mechanism. While this toy was produced at the end of the Japanese "Classic Era" of tin toys and lacks the fine detailing found on earlier models, it is nonetheless very elegant and has a presence only matched by the real thing.
It was produced in this very attractive color scheme of pale yellow, but also in black and there is an olive-green version with mustard colored roof, not the best choice!
The story of this particular toy is interesting, because the person I obtained it from, now in his 50s, received the toy as a gift when he was 9 years old. he liked it and respected its beauty so much that he never played with it, explaining the very nice condition in which both toy and box have survived.
In 1963, SSS made a convertible version of this Cadillac with "flocked" seats simulating velours, and an electric mechanism with operation by a key on the dashboard. This one is generally seen in red color.