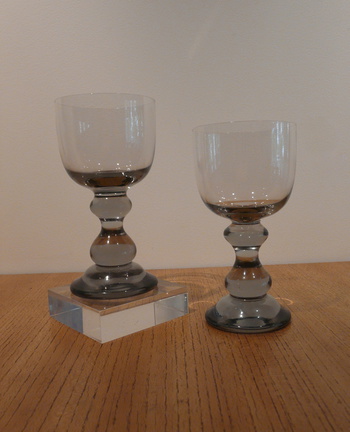 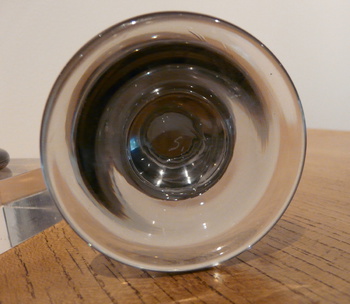 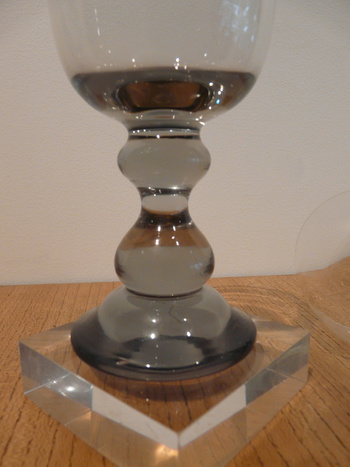 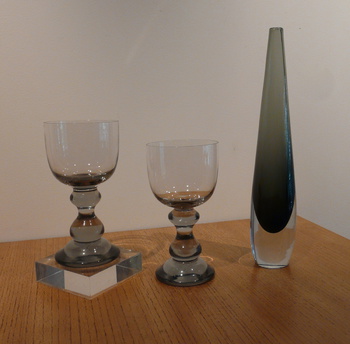 Yesterday there were slim pickings at the monthly Collector’s Market here is Sydney Australia. Or at least, that’s my excuse for having just bought these two goblets.

Just what I need, new glasses!

But I could not resist them!

And when the dealer, a really nice young bloke called Andrew told me they were Strombergshyttan, well I had to take the plunge. Both of these goblets are signed “S.”. Young Andrew added that he had kept one glass and it retained the Strombergshyttan sticker.

I remembered the “S.” = Strombergshyttan as having been mentioned here on CW but for the life of me I can’t track down the reference. Rebessin filled in the details:
Today it has been confirmed that Gunnar Cyrén is designer for "Allmoge", by masterblower Jan Joansson, and his wife Ann-Marie, who both worked at Strombergshyttan the last years until 1979. They also said that Cyréns tableware serie "Herrgard" was designed for ,and produced in Strombergshyttan for the first. Allmoge had also celter glass, bowls and lantern/candleholder.
Orrefors introduced also a new sticker for Strombergshyttan (a typical 70's as I see), and in the bottom of the glassware they now signed with an S (se trough the foot in first picture). I don't think so much glass of this tableware serie came out before Strombergshyttan closed down in 1979. What I have seen these are more sought after in the collectors market than older tableware glass from Strombergshyttan, at least here in Sweden."

These have a real bell tone when tapped.

On the base they have no pontil mark buy I can feel and see the ‘gadget’ scar. I don’t think you’ll be able to see it in the photos.

Rebessin has recently commented that “In the oldest directories I've found five different crystal colors from Strombergshyttan”. The blue tinted crystal, the citron of his new Unica, there was a dark green set of glasses by Gerda Stromberg, this grey has a purplish tint to it and there's a bronze amber shade as well.