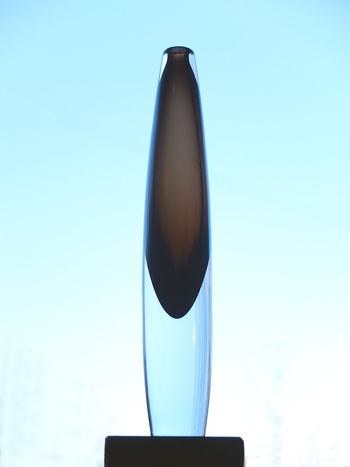 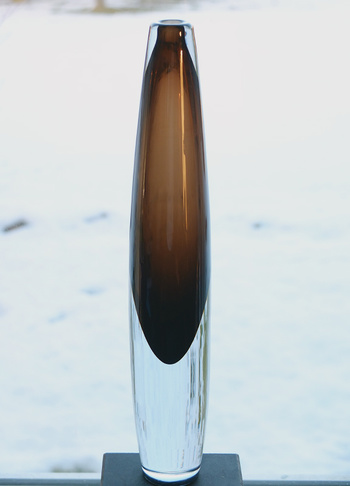 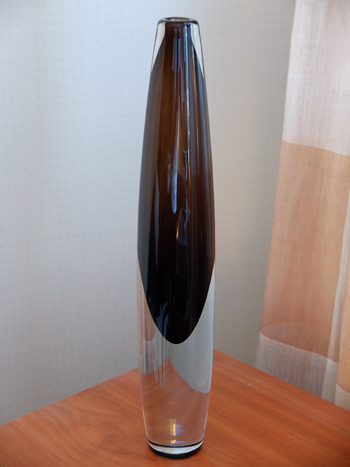 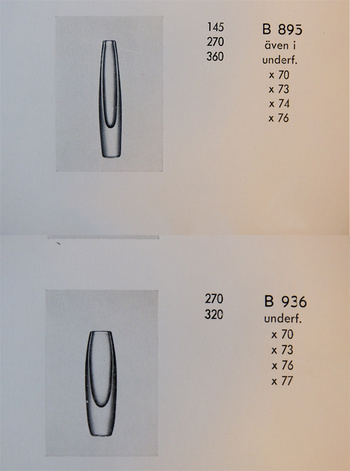 This vase with model number B895, called "Sputnik", was designed by Asta Stromberg at Strombergshyttan in the late 1950's. Here is a version with brown underlay and 30 cm length. The vase was manufactured in several lengths and both in pure clear, bluish Stromberg-crystal and with colored underlay. In Italy this technique with colored underlay was named to "Sommerso", which I think means "submerged" or "recessed". The color is then like recessed or submerged in the clear crystal.

Often one comes across "facts" that this particular Sputnik model was designed by Gunnar Nylund, but it is incorrect. I have also seen that Gerda Stromberg stated as the designers sometimes. But it is Asta Stromberg who designed the Sputnik, and no one else. It was designed around the end of the 1950s.

Asta Stromberg started drawing glass before Gunnar Nylund came to Strömbergshyttan 1952, and renewed the range that Gerda Strömberg founded in 1930- and 40's for the factory. Asta then proceeded to draw models until the mid-1970s, when Orrefors took over the management and ownership of Strombergshyttan. It can sometimes be difficult to guess the designer for Strombergshyttan glass as it rarely was signed with the name of the designer, but mostly just the model number. Some models are, however, documented in form to the designer, both with drawings and input data of catalog images.

Another model that I think is of Asta Stromberg's design is the vase B 936. It is otherwise also attributed Gunnar Nylund. What I base this belief in is the proportion similarities with the Sputnik vases. The ratio of the height of the inner bottom end is the same for these two models, approximately 1/4 (or near 1/3) of the entire length of the vase from the outer bottom. B936 is only wider and has an oval shape instead of round as for B895. Otherwise, similar in design and proportions.

After Orrefors, who bought Strombergshyttan 1976, closed down the production in 1979, continued Sputnik B895 (as well as about 100 other Stromberg models) to be produced at Orrefors Glassworks.
_ _ _ _ _ _

Edit: Have now completed with a picture for comparison between Sputnik B 895 and B 936.

Also a comment why this Sputnik has the brown underlay to the outer edge of the vase: The clear glass side thickness is a little thinner than it should be, therefore, reach the brown color all the way out. On the other hand, I have seen many Sputniks, both signed and labeled, with too thick sides and very thin inner "cup" relative to those found in the catalogs. They resemble more the shape of the model B 1150, also a narrow vase by Asta Stromberg but with air rings embedded in the walls and not so rounded sides. My example of B895 has the right proportions and outer thickness/shape, but is probably a second class vase (due to the little thinner walls). It's not signed or labeled, only the X-code for the brown underlay color engraved on the bottom. Probably a vase they put aside to serve as a test for the specific color.