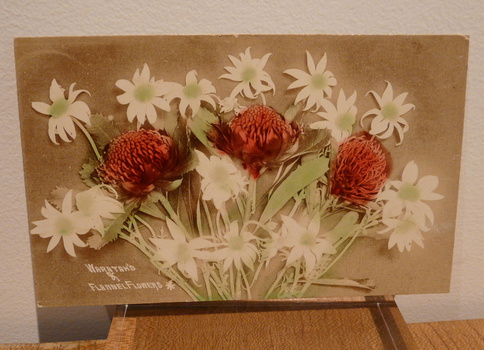 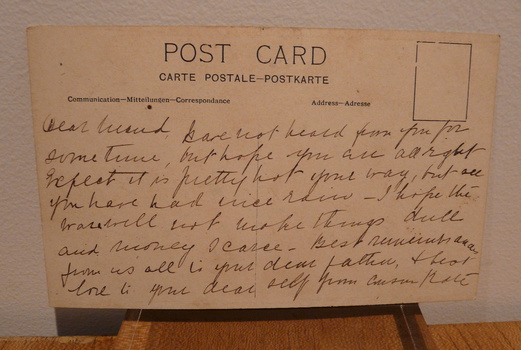 I suppose this card from Maude Lankester's collection can be dated to the early years of World War I. “I hope the war will not make things dull and money scarce” suggests that it may well be during the early days of World War I. The Lankester family was engaged in wine making. Her father was John Delappé Lankester an early Australian wine maker, manager of Ettamogah vineyard.

The flowers are attractive in themselves. Waratah's (sic) and Flannel Flowers. Both of these flowers are Floral Emblems. Both are associated with my home state of New South Wales. Ettamogah is on the border of New South Wales and Victoria, approximately 565 km or 350 miles south of the capital Sydney, where I live.

In 1901 Australia became a Federation of States. The floral emblem chosen for New South Wales ass the flannel flower (Actinotus helianthi). It is the daisy like white flower in the illustration. Short lived, shrubby perennials with grey-green foliage and attractive white flowers from spring to summer (usually late September to early December). Although the flowers are daisy-like in appearance, flannel flowers are actually related to carrots, parsnips and celery (they are in the plant family Apiaceae). An unusual feature of the flowers is their 'flannel' texture. The petals are actually modified leaves, usually called bracts. The true flowers form the centre of the flower.

The vibrant red flowers are called Waratahs (Telopea speciosissima). In 1962 they became the official floral emblem of New South Wales. Robert Brown (1773-1858) named the genus Telopea in 1810 from specimens collected in the Blue Mountains, west of Sydney. Sir James Smith (1759-1828), a noted botanist and founder of the Linnaean Society in England, wrote in 1793:
'The most magnificent plant which the prolific soil of New Holland affords is, by common consent, both of Europeans and Natives, the Waratah. It is moreover a favourite with the latter, upon account of a rich honeyed juice which they sip from its flowers'.

Both of these flowers say New South Wales. I suppose they reflect a nationalism too at this period early in the war. I love this card and its sepia and red tones and they remind me how close we are to the centenary of the "Great War".

I read the text on the back of the card and was struck at how unimportant the word 'war' was in the text. It did not have the gravity of "World War". At first I found it difficult to discern, as if it were not there at all.

"Dear Maud,
Have not heard from you for some time, but hope you are all right. Expect it is pretty hot your way but see you have had nice rain . I hope the war will not make things dull and money scarce. Best remembrances from us all to your dear father & best love to your dear self from cousin Kate."