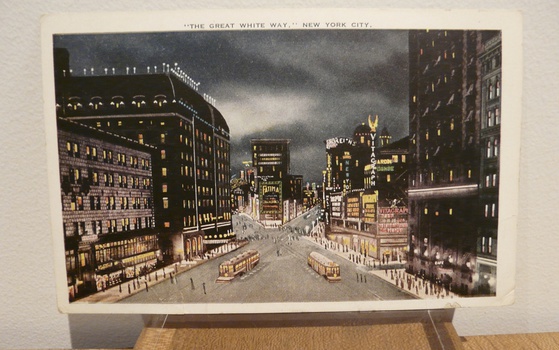 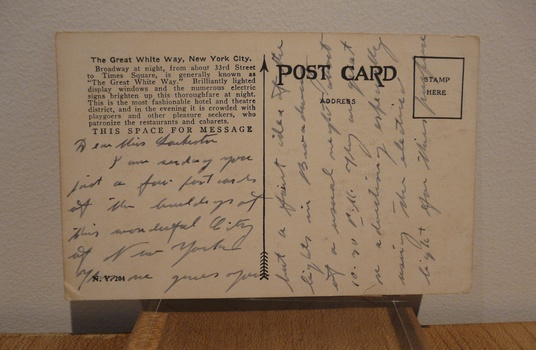 This is one of two postcards that were sent to Maude Lankester around 1920 by an Australian visitor to New York City. Both cards record the visitor's impressions of a vibrant, modern city so different to what they knew in far off Australia. Both of the cards are 'artist's impressions' of the city and in this case it is New York by night. This card is numbered "N.Y. 204". It has not been franked, but has been used to make a note to Maude:

(The phrase Great White Way has been attributed to Shep Friedman, columnist for the New York Morning Telegraph in 1901, who lifted the term from the title of a book about the Arctic by Albert Paine.)

"Broadway at night, from about 33rd Street to Times Square, is generally known as “The Great White Way”. Brilliantly lighted display windows and the numerous electric signs brighten up this thoroughfare at night. This is the most fashionable hotel and theatre district, and in the evening it is crowded with playgoers and other pleasure seekers, who patronize the restaurants and cabarets.

Dear Miss Lankester
I am sending you just a few postcards of the buildings of this wonderful city of New York. This one gives you but a faint idea of the lights in the Broadway of a usual night about 10.30 pm. They are great in advertising especially using the electrical light for this purpose.

The handwriting is the same on both cards. The other card is signed, I believe, GLWinchester(?).

The card is not dated, so details on the card were important to look at as I tried to put my collection of 110 odd postcards back into some kind of order.

Great learning vehicle, too!
Two details on this card struck me: Fatima and American Vitagraph.

The artist has picked up on two bright signs at the "Great White Way": Fatima cigarettes and rather than the theatres of Broadway it is the lights of the Vitagraph cinema that brighten up the night.

Fatima cigarettes were a Turkish Blend made by Leggett & Myers Tobacco Co. Their advertising included statements like these in those days:
"Fatima of course it's a Fatima, nothing else will do, 20 for 25c. But taste the difference."

"American Vitagraph was a United States movie studio, founded by J. Stuart Blackton and Albert E. Smith in 1897 in Brooklyn, New York. By 1907 it was the most prolific American film production company, producing many famous silent films. It was bought by Warner Bros. in 1925."
http://en.wikipedia.org/wiki/Vitagraph_Studios

The Vitagraph reference dates the art work, in a way. It is after 1904 when Vitagraph took over the Criterion Theatre for New York's first movie palace. It also puts it earlier than 1916 when it reverted to a theatre and resumed the name of the Criterion.

But I was a bit lost about the location here.

Thanks to mustangtony I now know that it is Times Square.

I can now fill in some of the "illegibles"!
Loews N.Y. Theatre to the right. More movies?
As mustangT says there are hotels left and right:
The Astor and the Claridge.