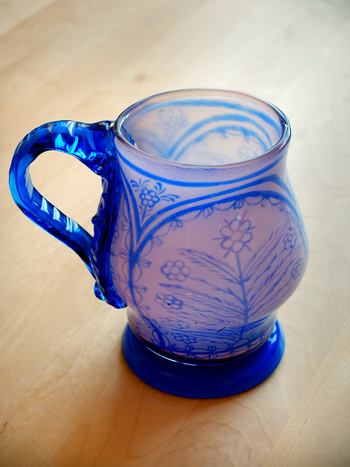 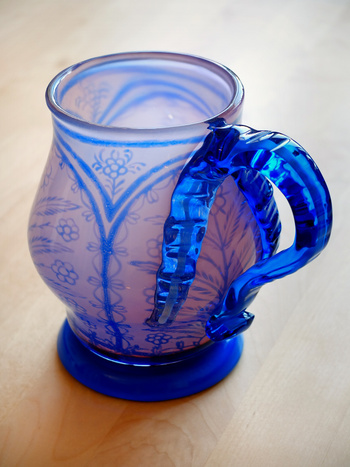 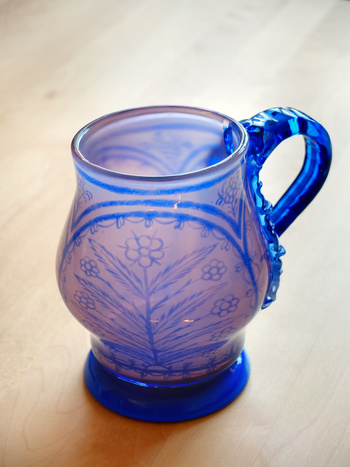 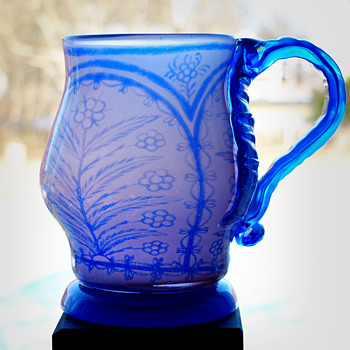 This is one of the first Graal glass manufactured from a preformed embryo. The first three was made by my grandfather, Knut Bergqvist, in late July 1916. But these came by dividing finished Gallé-glass in overlay technique into smaller pieces. Knut wished to quickly show his idea for Albert Ahlin and therefore he took a shortcut using finished galléglas as embryos. These first three graal vases was acid matted on the surface. One, signed no 1, stands at the museum in Orrefors, today owned by "Glasrikets skatter". No 2 Gate took with him to Stockholm to show his artists' friends. And no 3, Knut took home to his villa in Orrefors. That vase unfortunately went to pieces when the children were playing, but the base is still preserved and is signed "Graal Orrefors KB, 28 Juli 1916, No 3".

The pattern and shape in the early tankard from 1916 is Knut Bergqvist's own, but the etching of the pattern on the embryo was made by Heinrich Wollman. It is not signed but Knut told my father, it was one of the first graal pieces he made from a special prefabricated embryo in 1916, maybe the first? It has only two color layers, and you can also see that there is a clear glass layer between the inner purple color and the blue outer pattern. Later Bergqvist invented a special "over driving/pushing" method that made it possible to add up to five or more colors into each other in the emryo, without clear glass between. This meant that they could more easily etch down through the color layers, and the embryo became easier to roll smooth after reheated. In this way they avoided the air formation that could otherwise easily occurre in the pattern (see ariel where you use these air formations by making deep patterns with sandblasting or engraving).

During the autumn 1916 Orrefors produced several pieces in the new Graal technique. The embryos was made by Knut Bergqvist and the pattern that Wollman etched on them was composed etiher by Wollman himself or by Fritz Blomqvist. The form/shape for some of this earley graal glasses from late 1916 and 1917 has been attributed to Fritz Blomqvist, but I think this is a missunderstanding. He only drawed some pattern for graal glasses and according to a story that is printed in a book by Arthur Hald and told by Orrefors manager Albert Ahlin, Blomqvist only worked with transfering patterns to the graal embryos, and this during one month each in 1916 and 1917. Before that (in 1915) he transfered patterns to gallé-glass during one month. After that, he quit his job at Orrefors. There is (what I know) also no information in Orrefors archives showing that Blomqvist designed graal glasses to form. I know that some experts are of a different opinion, but as long as they can not present any facts showing that Blomqvist did other than composed and transferred patterns to some graal glasses in 1916 and 1917, it does not change my belief about who designed the form in early glasses with interlayers decor at Orrefors.

In 1917 Simon Gate came into composing patterns for the new graal technique. After a time he also began to compose the forms, but first in colaboration with masterblower Knut Bergqvist. This is described and recorded in a story by Knut Bergqvist (reproduced in the book "A Love of glass - Agnes Hellners collection of Orrefors Glass"). Also Edward Hald began to work with the new graal technique in 1917. Together the three pushed it into artistic perfection and the new Swedish art glass had been born.