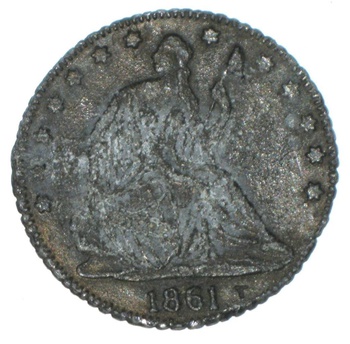 I have a growing fascination with the US Civil War but it has grown more in the last year.

Here is a Confederate Half Dollar I stumbled across lately. The photo does not do full justice. The coin seems real if you were to hold it in your hands - it does not seem fake - it appears to be legit. Old, dirty, corroded - as if it has been buried in the ground for a long time - and unusual.

I know, I know...somebody is going to let the air out of my tires on this one - but the coin seems genuine. I do not know if it was a counterfeit or an early restrike. It may be worthless - but I don't think so! It is old whatever the case may be - and by "old" I mean over a 100 YEARS OLD. I should know, I collect US coins and foreign coins. If this was a fake, then somebody has pulled the con job of the century! For what? A few lousy bucks? Really? - I don't think so.

Yes, the reverse has 17 buds instead of 19 buds on the cotton strand. Yes, the coin may not contain much silver. Yes, the diameter may be smaller than a SCOTT restrike. Yes. yes, yes - I get it! This coin is still very old and has some mystery surrounding it!

The "T" punched next to the 1861 date - there are a dozen meanings according to my research. One expert will say "T" means "TOY". Sorry, nice try but I don't think so. It is too authentic to be just a toy (if it were to be a toy - then it is a very old toy!). The "T" has been defined by other experts to mean "TEXAS", "TRADEMARK", "TAYLOR" (B.F. Taylor - Chief Coiner for the New Orleans mint). And so on...

One camp argues this is a replica manufactured in Europe (once again - I don't think so) - while the other camp says this type of a coin is a counterfeit coin from the period and was used as a token for trade in the Southern States. Yet another faction claims this is perhaps a counterfeit from the period forged within the Union and issued by the Northern States into circulation in order to create deflation or inflation within the Confederacy.

Well, the stories never end and everybody has an opinion! I am fairly certain the coin is not one of the 4 known originals struck in 1861. Those four originals seem to accounted for in full.

I will stop here now. The folklore goes on and on...but one thing I do know is you cannot find any information about these type of coins (remember the "T") on the "good ol' Internet" . You can find out a lot about "The Kardashians" on the Internet though - if you are interested. The reason? Well, simple - who really remembers the Civil War? Not the kids of today - certainly not. Only the Civil War buffs (generally over the age of 50) are going to take any real interest. I am sorry but this is the truth!

Before I go, I did find one mention on the Internet wherby a Historian claimed these CSA coins were minted in California from the 1880s to the early 1900s (exact dates unknown) by a coin maker who would sell them at carnivals, county fairs and the like. I can't prove it but who can? However, it may be the most likely answer.

Please if anybody has any pertinent information about this CSA half dollar, then simply reply here on this post. Your input is greatly appreciated!

Thank you to all!