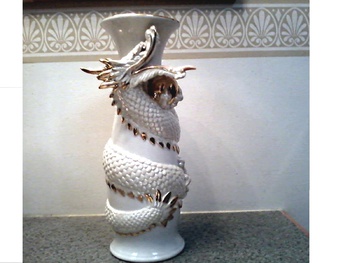 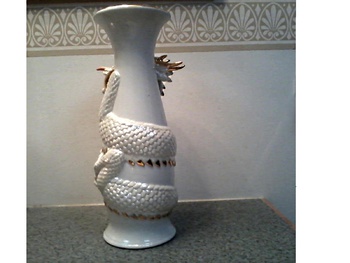 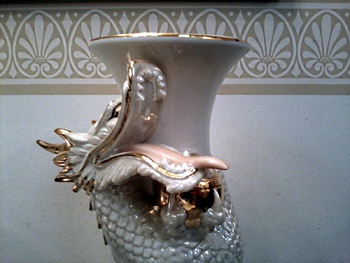 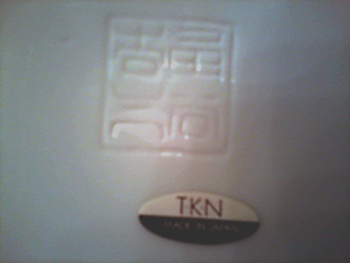 Well, you're either going to love this or hate it. In fact I didn't buy it when I first looked at it. I went back later in the evening hoping it was still there. I've been doing that a lot lately. It's really well done without a speck of damage or wear. It is 14" tall and appears to have been molded because the dragons body is hollow from the inside of the vase. The inside is not glazed just the top part of the flare that you see , the rest of the inside is bisque. The vase is mostly white, but the dragon's body has a touch of "lustre" iridescence. The whole vase is strikingly detailed in gold. It has a pottery mark in Japanese" Kanji " characters stamped into the bottom but I have no idea what it says. The little label just says T.K.N. Made in Japan. It's probably a type of gift ware made for export. No idea if it's old or new. By old I'm thinking mid-century. There are some dragon figurines on Ebay made by Yoshimi K. which look much like this one, but they are clearly signed. Maybe the stamp on the vase is his name. Can't find anything about him online and nothing like this vase ! I think it's really amazing if a bit scary ! -Mike-

Latest research :
TKN , AKA Royal Trading Co. LTD based in Nagoya, Japan was founded in 1956. They are an import /export company for ceramics and porcelain from all over Asia and quite a few others things. So this is basically gift ware but I'm not sure of the age or maker. Translating the impressed mark might solve that mystery. It appears to be Japanese Kanji. Could say anything from the artist's name to the city the factory's kiln was in.