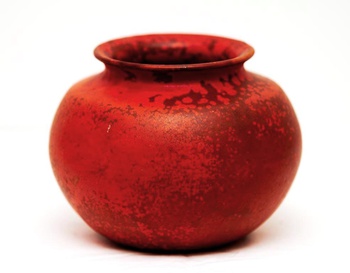 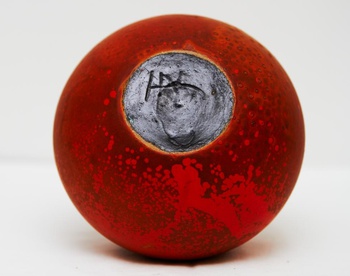 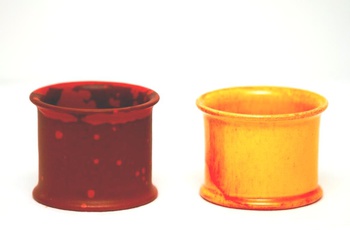 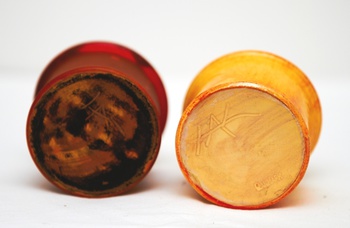 The Danish Kähler Pottery is probably mostly known for its ‘horn-glaze’ pottery from the early part of the 20th century. But Kähler developed several other characteristic glazes such as this matte orange uranium glaze which was used from the early 20th century until ca. 1930.

The Pottery was founded in 1839 by a German immigrant Joachim Christoph Herman Kähler (1808-1884). His younger son, Carl F. Kähler (1850-1920) ran the place 1872-1895, followed by the older son, Herman August Kähler (1846-1917). H.A. Kähler’s son, Herman Hans Christian Kähler (1876-1940), took over in 1917, and he was particularly fond of these uranium glazes and that’s why this vase is attributed to him (very few Kähler pieces are signed with anything but ‘HAK’, so they can only be attributed to certain artists based on the style or information in old catalogues). A vase similar to this one has been exhibited at the Ceramics Museum of Denmark and in the catalogue it is dated 1900-1920. In 1928 H.H.C. Kähler and Jens Thirslund (a ceramist affiliated with Kähler 1913-1941) developed a yellow (and slightly more shiny) version, along with a similarly shiny turquoise glaze which became very popular. That’s why I also post a photo of two smaller vases with the orange and yellow version of the uranium glaze – just for comparison. I am not sure what these vases were meant for – either they are small vases or, perhaps more likely, cigarette holders. H.H.C. Kähler also developed a range of pottery for daily use at Kähler, in contradistinction to the earlier strong focus on decorative pottery – I do see tea pots and cups, plates etc. with this lovely yellow glaze from time to time on markets etc. In general, all the uranium glaze vases have rather simple shapes - from time to time they have sgraffito decoration, but usuallly they have no handles or any other 'complicated' adornment.