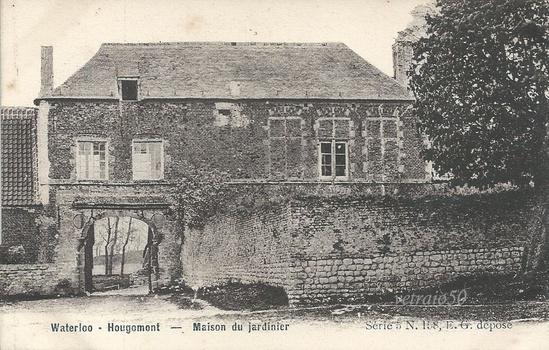 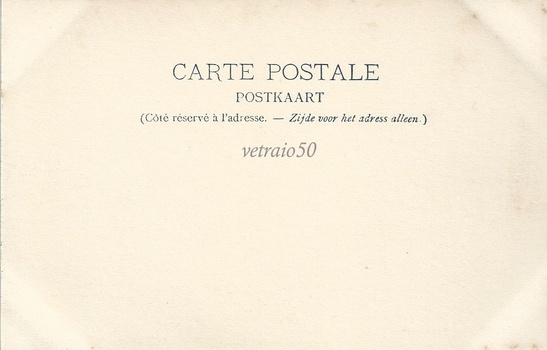 A third card on the Hougomont battle that began the Battle of Waterloo collected by the Millers in 1907. It reflects the importance of the site. It is the Southern Gate to the fortified chateau complex.

Next year 2015 will see the 200th anniversary of the Battle of Waterloo.

This is a site now being restored in preparation for the events planned for next year.

"Why is Hougoumont Important?

During 18 June 1815 the walled farmstead of Hougoumont was attacked seven times by Napoleon’s infantry and was defended with tenacity and resilience by soldiers of the light companies of three British regiments of Foot Guards, soldiers of the 1st Nassau Regiment and the 1st Hanoverian Brigade.

At midday the French broke through the north gates, but the Guardsmen rallied and, after furious and bloody hand-to-hand fighting, drove them out. Then, putting their shoulders to the gates, they succeeded in closing and barring them for good – a moment recorded in Robert Gibb’s famous painting and more recently by Chris Collingwood. The battle for Hougoumont was marked by extraordinary courage and much loss of life on both sides. Later, Wellington famously remarked that the outcome of the battle of Waterloo turned on the closing of the gates at Hougoumont.

Hougoumont remained a working farm until the late 1990s when the last tenant retired. Since then the condition of the buildings has deteriorated to such an extent that some are now on the point of collapse with cracked and bulging walls and roofs falling in. Nevertheless, in a remarkable way Hougoumont still looks much as it did when the battle ended; the gardener’s house, dairy, cow shed, barns and chapel survive more or less as they were depicted in series of drawings made on the spot by the Prince Regent’s Military Artist, Denis Dighton, a few days after the battle, while outside the walls three ancient chestnut trees, still bearing scars of battle, mark the site of the wood which gave cover to the attacking French. It is a remote, still rural and intensely atmospheric place.”

This is a postcard published by E.G. that I believe was a Belgian firm E. Grégoire, Series 5 No.158.