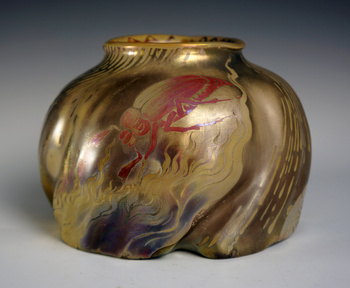 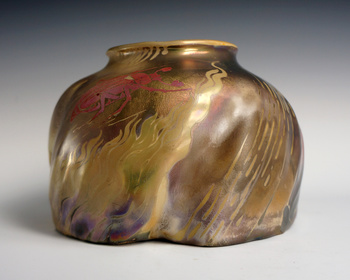 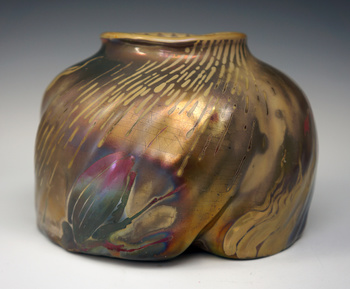 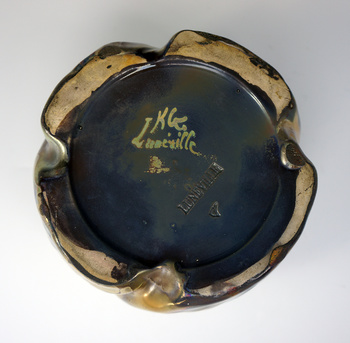 This one was too wild to pass up. A squat, but imposing, stoneware vase by Keller & Guérin (Luneville, Fr.) in predominant gold, purple and red reflet métallique glaze with a beetle, flame and (what I suspect is also) rain motif. I have seen only one other similar example of this form and motif, but that other example had differing form sides that were not as deeply impressed and the decor did not have the flames. An inspection of the inside clearly reveals that the piece was hand thrown. I can only guess who may have designed the vase, but given the two similar (but not identical) known examples it looks like these vases had a rough design guide but some freedom was given to the studio potters in applying variation of features and motif. Circa ~1900-1905. Dimensions: 5.5" (width) x 4" (height).
----------------------
Founded in 1786, Keller & Guérin was a faience manufacturer based in Luneville, near Nancy. By the 1880s Keller et Guérin, successfully produced an eclectic mixture of barbotines and earthenwares with painted or printed decorations. During the Art Nouveau period, the firm's output was informed by the organic work of the school of Nancy. Famous ceramists, including Edmond Lachenal and Ernest Bussière, were commissioned to create new designs using stoneware clay and luster glazes.