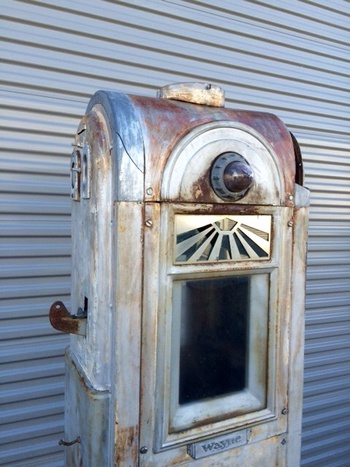 This old narrow body Wayne 60 came from a rancher in upper Wyoming. My wife and I had taken a trip to Billings to pick up a couple of gas pumps I bought on Craiglist . "We" decided while in Billings, that since we were "so close" to Rapid City we would just take a little side trip and go see Mt Rushmore. Very cool experience! On the way home from Rushmlre we saw a beautiful ranch off in the distance from the side road we were traveling and decided to see if they had any old cool memobibilia. At first the rancher said he didn't have any old gas pumps and then he remembered the one he had taken down a while back after having hit it with his tractor. His beautiful young, and recentely married, daughter got out of the big front end loader she was operating and took me out to the "south forty" on her ATV and showed me the prettiest gas pump I had ever seen out in the wild!!! My heart began to thump and race as I examined the pump and I stumbled for words as I tried to make an offer that would sound somewhat reasonable. Unfortunately I seemed to be tongue tied and just couldn't seem to make any offer that was enticing enough to the old rancher. (I call him old but he is a lot younger than me) We finally left with long sad faces, but I did manage to remember to get their names and upon arriving home to Utah I looked them up on the Internet and got their phone number. During the past year I have called and emailed them multiple times to no avail, but we did become friends somewhere in the long process. Friends are the biggest gain we make in the collecting process.
Finally after about a year of calling and visiting and while my son and I were on a very long trek from Utah to NC to pick up some porcelain signs and a P-51 Mustang I had bought over the phone, I got a call from my friend in Wyoming asking me if I still had that 9mm pistol I had offered to trade him for his gas pump. I replied that I did and that we were on the road right then but that we would "drop by" on our way home from NC. Drop by? It was 200 mi out of the way and we were overloaded as it was! Besides that the pistol that I had offered him was a Smith and Wesson 9mm worth about $700 and the pistol I had with me was worth about $1200. We often carry guns and concealed weapons permits when we travel out in the "wild" West as we also carry a fair amount of cash at times. Gas pump hunters are nuts and we made the long trip up the side roads to back Country Wyoming and managed to somehow fit our beautiful new Wayne 60 gas pump in with all the other stuff and then made it home. Did I mention that we also bought a beautiful AeroMotor windmill while at our friends Ranch? Only one blow out on the entire trip. That and a little fender bender on a guy who wouldn't let me back in after passing him and a bunch of other slow pokes on the road. Watch out for crazy old men pulling long trailers full of junk and signs and gas pumps! They're NUTS and not that good of drivers either!!! I luv the Narrow body Wayne 60s as their lines are just outstanding and there is really no other gas pump quite like them. This one still needs a little TLC but it looks great and brings me a thrill to think of how we found it and finally got it and got it home. Of course we have a new friend for life in the process. Isn't America Great?