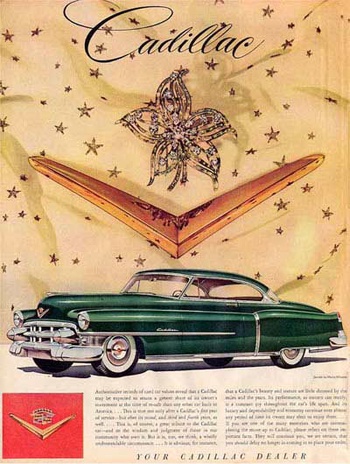 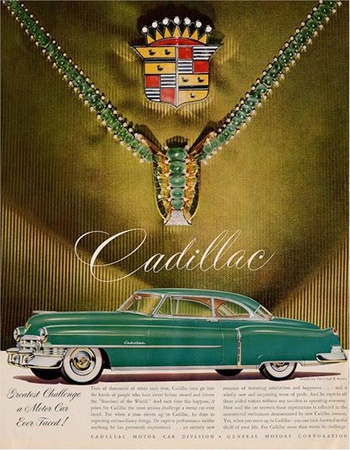 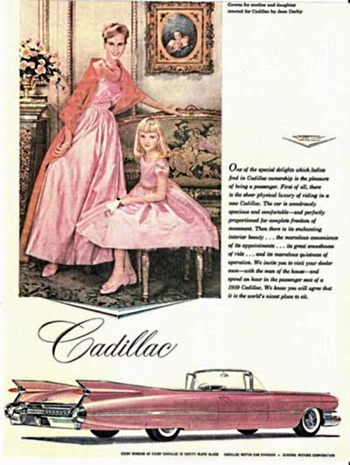 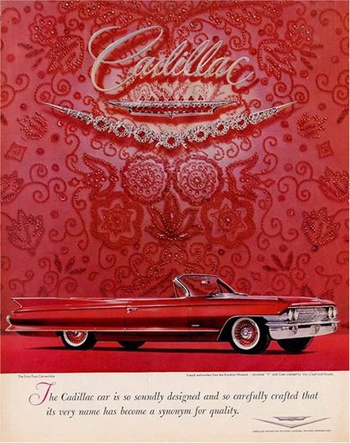 I just love Harry Winston's ads for Cadillac. Beautiful cars and jewelry (gowns and furs as well) make for a perfect combination. The controversial mother daughter ads are considered rare. The 1959 pink Cadillac ad is beautiful with gowns by Jean Derby who worked with Oscar De LaRenta. He eventually took over her line after her passing. The small print in this ad reads basically "Visit your local Cadillac dealership with" the man of the house" and enjoy the passenger comfort on your test drive" Sorry ladies guess you can't drive this car or buy one back then unless you were "the man of the house". Just sit there and look pretty.
While I don't own any of these ads personally I've collected all the images I could find online and there's a lot believe me. Here's a sample of four with dozens more online. Simply beautiful pictures from classic eras we'll never see again ! -Mike-

"When it comes to diamonds, one name in Hollywood shines brightest: Harry Winston.
Known as jeweler to the stars, the 81-year-old diamond company has adorned celebrities on the red carpet as well as on and off screen for decades."

Harry Winston "Jeweler to the Stars"
Courtesy of Wikipedia

Harry Winston (March 1, 1896 – December 28, 1978) was an American jeweler. He donated the Hope Diamond to the Smithsonian Institution in 1958 after owning it for a decade. He also traded the Portuguese Diamond to the Smithsonian in 1963.
Harry Winston's father Jacob started a small jewelry business after Harry's mother and he immigrated to the United States from Ukraine. While growing up, Harry worked in his father's shop. Legend has it that when he was twelve years old, he recognized a two-carat emerald in a pawn shop, bought it for 25 cents, and sold it two days later for $800 !
Winston's jewelry empire began with his acquisition of Arabella Huntington's famous jewelry collection. The wife of railroad magnate Henry Huntington, Arabella amassed one of the world's most prestigious collections of jewelry, largely from Parisian jewelers such as Cartier.

When Winston bought the collection after her death, the designs of the jewelry in the collection were quite old fashioned. Winston redesigned the jewelry into more contemporary styles and showcased his unique skill at jewelry crafting. According to the Huntington museum, "He frequently boasted that Arabella's famous necklace of pearls now adorned the necks of at least two dozen women around the world."
Winston was among the most famous jewelers in the world, well-known to the general public. In the 1953 musical film Gentlemen Prefer Blondes, the song "Diamonds Are a Girl's Best Friend" includes the spoken interjection "Talk to me, Harry Winston, tell me all about it!" The Lauren Weisberger comic novel, Chasing Harry Winston, was published in May 2008.
Today, the Harry Winston Diamond Corporation operates eight salons in the U.S., in New York, Beverly Hills, Las Vegas, Dallas, Honolulu, Bal Harbour, Chicago, and Costa Mesa, as well as seventeen salons in other countries.

A link to another great article and pictures here:
AUTO HISTORY
Cadillac in the "Madmen" Era: Advertising Mid-Century Luxury