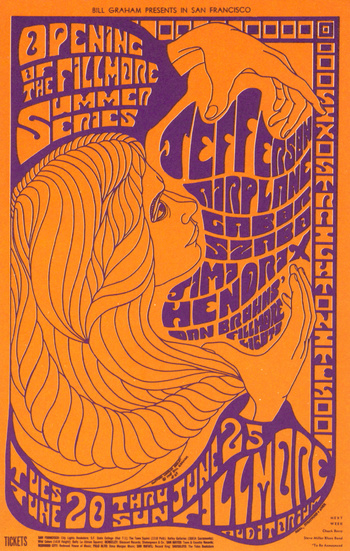 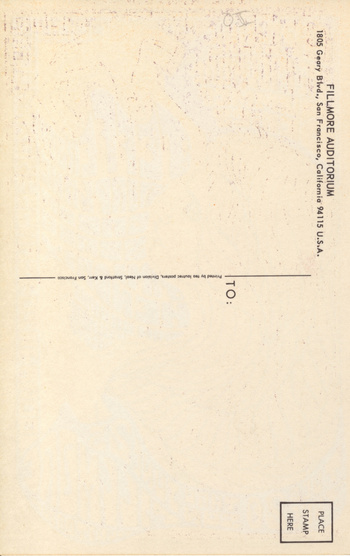 When the lineup for Monterey Pop, June 16-18, 1967, was originally drawn up, Jimi Hendrix was not the legend he is today. Indeed, his Sunday night performance at the seminal California music festival was the event that catapulted him to his fame.

San Francisco rock impresario Bill Graham used the timing of Monterey Pop to book bands like the Who and Hendrix into his fabled Fillmore Auditorium—the Who performed at the Fillmore on June 16 and 17, then did Monterey on the 18th. In contrast, Hendrix was signed for a grueling six-day run of shows, from June 20-25. That's what this postcard, by Clifford Charles Seeley, advertises.

As you can see, local favorites the Jefferson Airplane were given first billing, followed by jazz guitarist Gabor Szabo, with Hendrix in the usually thankless role as opener. Reportedly, Hendrix was paid a paltry $750 for all six nights.

The excitement of Hendrix's weekend performance at Monterey Pop carried over to the Fillmore run, which eventually caused a shuffling of the lineup. Back then, bands at the Fillmore each played an early and a late set, which meant that after Hendrix, Szabo, and the Airplane had finished their first sets, the cycle would start all over again. Unfortunately for the acts at the top of the bill on that first night, half the crowd split after Hendrix's second set, which prompted members of the Airplane to ask Hendrix to swap places with them in the rotation, which he did. Happily, the poster and postcard were never updated.