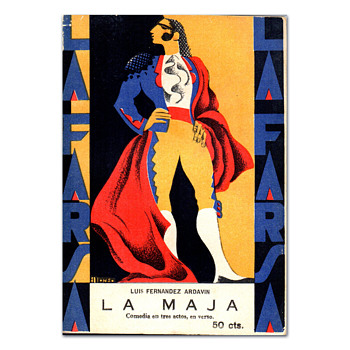 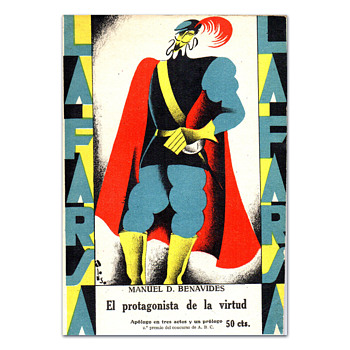 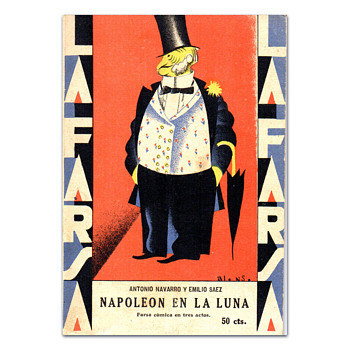 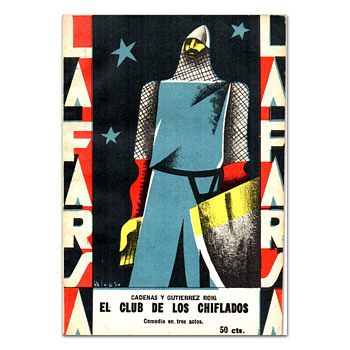 I felt in love with this illustrations yesterday evening.

Every Spring and aAutumn Madrid holds an Antiquarian Book Fair, so a few dozens stands are erected in the very central Paseo de Recoletos and sellers from all around Spain offer their antique, rare and second hand books. We went there yesterday -as a prelude of the long weekend starting today- and suddenly I found, and felt in love, with the first cover I'd ever seen from this books series called LA FARSA (pic1).

LA FARSA (Farce in English) was a series of weekly theater books. Each issue offered one or two plays -drama, comedy...- by both Spanish and international playwriters, which was published between 1927 and 1936 -I guess they stopped publishing it when the Civil War started-. Although they later started using photographes to illustrate the covers, during the first years they used lithographic illustrations by Alonso, an artist I've been unable to find any information about on the internet, but who certainly was an excellent one. I absolutely love the modernity of his drawings, the bold colours, the avant-garde look about them...

The first cover shows a Picassesque design, quite reminiscent of the clothes designs made by Picasso for the ballet El sombrero de tres picos (The Three-Cornered Hat), composed in 1919 by Manuel de Falla and that was choreographed by Léonide Massine when it was first released in London by Diaguilev's Russian Ballets ( https://www.youtube.com/watch?v=JO76VMryY9U ). the second one depicts Don Juan Tenorio, one of the most important characters in Spanish theater (which is the same Don Giovanni in Mozart's opera). The third cover shows a comic character, from which I love the way it0s been srawn, specially the lights and shades of his clothes. But I absolutely love the strength of the mediaeval character on pic.4

From the early 1920s until the begining of our Civil War in 1936 Spain lived a Golden Age in terms of science, literature, culture, music and art, developed in a time of absolute political crisis, with a weak Monarchy that left the government in the hands of a dictator, which led to Spain becoming a Republic in 1931, and then the total political chaos which led to the Civil War five years later. But somehow, the best of our 20th century music and art and literature comes from this period.

I've been able to at least find out Alonso's first name: Félix. I've still haven't found out much about him, but at least I know that in 1932 he won, along with Ramón Peinador, the contest for the Carnival Masks Ball for the Círculo de Bellas Artes in Madrid... I've also found out that Félix Alonso also made illustrations for Gente Menuda, one of the best -and few- magazies for kids in the 1930s.

I hope I will be able to find more info about him soon.

More news about Félix Alonso González (apart from finding out his complete last name). I went to the Museo ABC de Dibujo e Ilustración (ABC Museum of Drawing and Illustration) to check some books hoping to find at least a biography of this and other illustrators. I didn't, but on a book about the Gente Menuda children's magazine I found out that he's one of the artists that worked at the mytical Spanish Pavillion for the 1937 Paris Exhibition, where Picasso's world famous Guernica was exhibited for the first time. He did as an "advertising artist". In fact I've found out a text on the Pavillion where they mention Alonso as a poster designer. During the war he worked for the Republican press and once it was over he did mostly for advertising and poster design (my guess is mostly for the movies). I hope to find more about this incredible artist although it's quite hard. There was another Félix Alonso González in Spain's art scene of the time, an sculptor, so every name search on the internet takes to him...

On a later search I've found a book on Spanish poster design. It mentions a 1948 poster exhibition in which Alonso took part, so that proves he went on working as a poster designer-