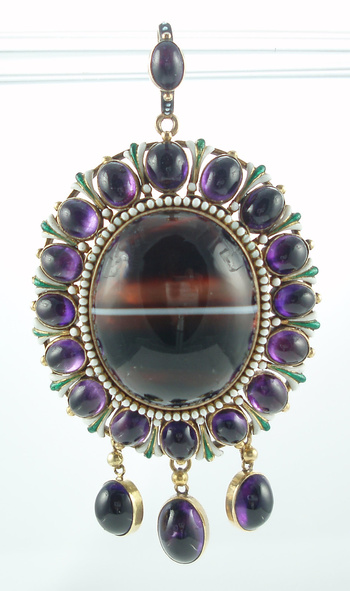 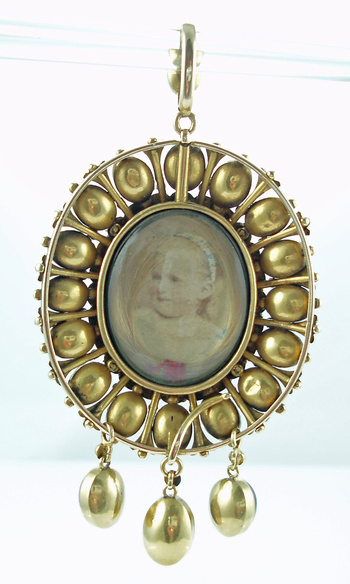 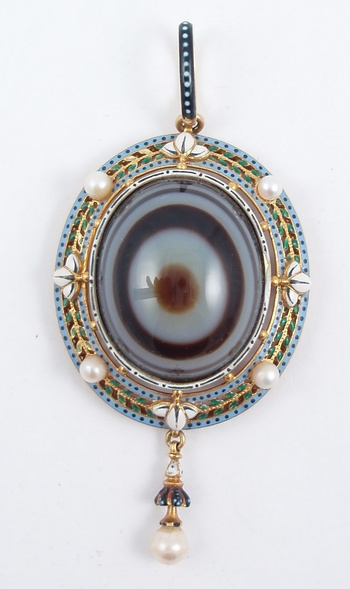 Two pendants and a cameo bracelet by Carlo Giuliano, an Italian master jeweler.
- Fabulous polished, banded agate cabochon surrounded by Russian amethyst cabochons and white and green enamel, with the signature Giuliano black and white enameled dots. A young girl's portrait and blond hair are in a compartment in the back. 18K gold. Fitted leather box -- label is faint but you can see: Giuliano, 15 Frith Street, Soho Square London. No signature.
- Bull's eye agate cabochon pendant in polychrome enamel in 18K frame set with natural pearls in original box marked C. Giuliano 115 Piccadilly London. Based on this address, the pendant was made after 1873. Signed on the enamel bale.
- A superbly carved shell cameo of a bearded gentleman in profile with a twisted gold wire border, centered on a flexible tapering bracelet of gold cylindrical links, signed C. G. in an oval, circa 1870. See page 172 Sotheby's "Castellani & Giuliano - The Judith H. Siegel Collection" catalog for a similar bracelet.
-----------------------------------------
The Sotheby's catalog for the Castellani and Giuliano auction of the Judith H. Siegel Collection says in its notes:

Carlo Giuliano (c. 1831-1895) moved to London from his native Italy in about 1860. It is now understood that he accompanied Alessandro Castellani to London with the intention of managing a branch of the latter's firm at 15 Frith Street, Soho, but at some point, Giuliano's business relationship with Castellani fell apart. Giuliano remained in London operating under his own name, selling Archaeological jewelry through the famous retailers: Emanuel, Garrard, C.F. Hancock and Roskell and Phillips. His sons Carlo and Arthur joined him in the firm.

Giuliano realized his English customers weren't ready to fully embrace Archaeological jewelry, and he shifted his workmanship to embrace a wider variety of sources including the English and French Renaissance.
The Giulianos are most famous for their Renaissance inspired jewelry decorated with polychrome enamels and set with diamonds and colored gemstones, often carved en cabochon.

His business booming, Giuliano opened his own store in 1874 at 115 Piccadilly, London, where he worked until his death in 1895.