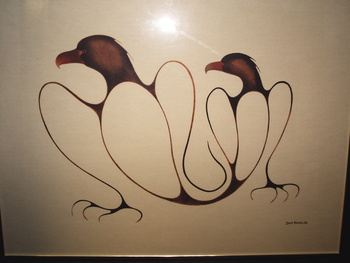 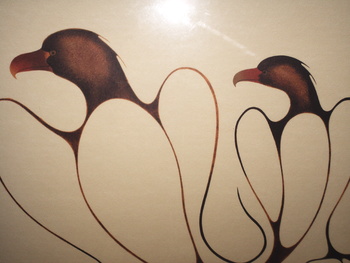 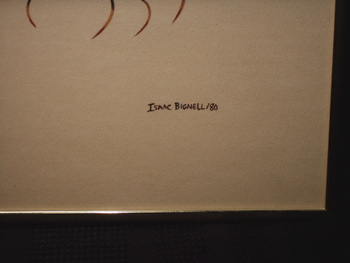 Hi
Everyone.
I have this Watercolors for almost 5 years now, i found this at the good time of Goodwill, when they don't looking on the internet, today if this Artwork come to Goodwill for sure i will not pay $12 dollar for it, this is sure, anyway, i knew at the moment i see this it was a good deal, but even better when at home i discover this was a Watercolors and not a Lithographie, i was jumping up and down, this is a gourgeous one to and very early in his career.

Isaac Bignell was a Cree painter, born in 1958 in The Pas, Manitoba 400 miles north of Winnipeg Manitoba. He grew up and lived on Opaskwayak Cree First Nation until his early teens. Isaac moved too Winnipeg, then too Minneapolis, MN and later to Vancouver, BC. Outside of a few art classes, Isaac was a self-taught painter who developed his own style of sponge painting, painting of wildlife images distinguished by flowing lines.

Isaac said, " I was brought up to live off the land...to hunt, trap and live in harmony with the earth. That life taught me to respect animals and the spirit and power of nature. My art is strongly influenced by the traditional ways of my people."

Primarily a self-taught painter Isaac worked through various techniques until he developed a distinct fluid style that speaks of the spiritual foundation behind the imagery.

He also loved to dance and was associated with numerous native drum and dance groups. He was quoted as saying, "I hoop-dance and sing Pow Wows to maintain my cultural heritage. Through art and dancing, I attempt to influence Native people to continue their cultural ways; the gift that was given to us by the Great Spirit."

Isaac died at the peak of his career at the age of 37 on December 17, 1995 at the Munson Medical Centre in Traverse City, Michigan USA. He was the devoted father of three.