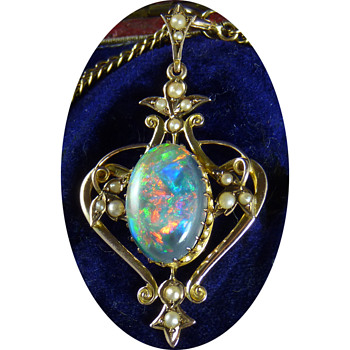 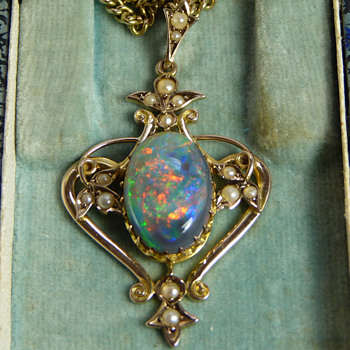 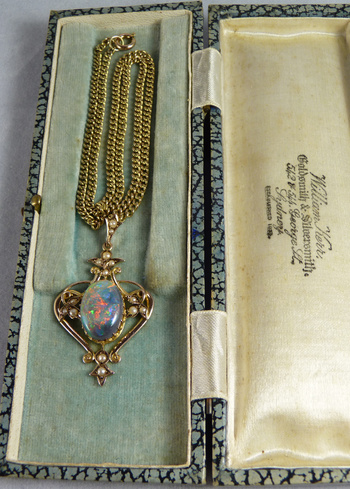 Lightning Ridge in New South Wales began to produce commercial black opal around 1905, although occasional stones were found earlier, and exploration attempts had began in about 1902.

Lightning Ridge opal is distinguished by a darker layer of opal without colour, that backs onto the highly coloured veins of gemstone opal.

Thus a black opal is one contiguous stone, all made up of opal. On the top is the brilliantly coloured layer, and below this is the darker layer of the stone (known as "potch"), which dramatically enhances the coloured layer above.

Tullie Woolaston was early on the scene, and began to export the fabulous output, and the Lightning Ridge opal rush commenced.

Soon experienced gem-cutters arrived from Germany. They rigged-up treadle sewing machines and bicycles to drive cutting and polishing wheels, and began to finish the rough opal, and to produce doublets and jewellery.

The miners then learned how to work their rough stones into a "rub" to show the colour within, so they could evaluate their finds.

The early Lightning Ridge opal processed in Australia was usually cut into high domed cabochons with a semi-finished or concave base, to be then mounted in jewellery by established firms in Sydney and Melbourne.

One such firm was William Kerr of George Street Sydney. William Kerr (1839 - 1896) came to Australia from Ireland in the early 1860's, and was principal manufacturing jeweller to Hardy Brothers (a famous Australian jeweller) for 11 years. He died in 1896 and the business carried on until 1938 under the control of his sons, William T. Kerr, Walter Laird Kerr and Harry C. Kerr.

This 9ct gold and pearl pendant is set with a 16 x 11 x 5mm solid black opal weighing about 6ct. The stone has a "galaxy pattern" that reminds me of a distant galaxy or a fiery gas cloud constellation.

I'd guess the piece was made sometime around 1910-14, when Art Nouveau was still in fashion, and before the Great War bought a halt to mining at "The Ridge".

Being an Australian piece that comes from that brief early flourish of Lightning Ridge, makes it quite a rare survivor.