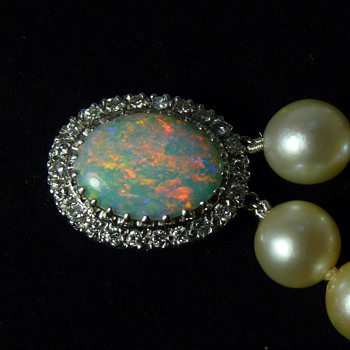 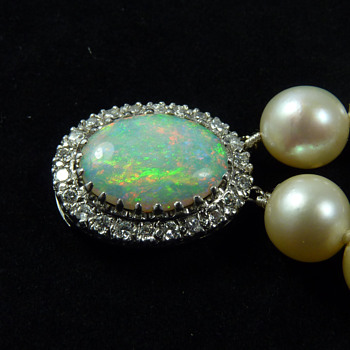 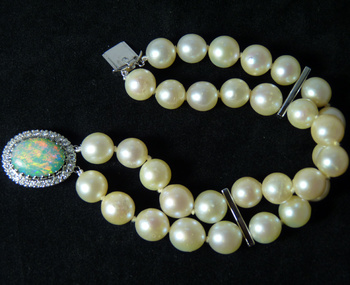 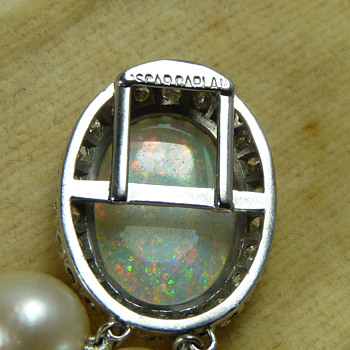 The 1950s to 70s were the heyday of opal from the South Australian fields of Coober Pedy and Andamooka.

In 1954, during her coronation year visit to Australia, the South Australian government presented Queen Elizabeth II with the 203ct Andamooka Opal, in a spectacular diamond and palladium necklace.

This gained world-wide publicity for South Australian opals. They became an exotic and desirable gemstone in affluent sectors of the American market, which always had a penchant for opal.

The pearl bracelet shown above is by Oscar Caplan, with large Akoya pearls that are all over 9mm, and featuring a very nice South Australian crystal opal clasp, surrounded by diamonds, and set in palladium. This opal shows a particular characteristic of crystal, which is a dramatic colour change in different lights, in this case from green to red.

The firm of Oscar Caplan was a Baltimore jeweller started in 1905, supplying the elite of the American Belle Epoque.

His son Marvin Caplan took over the business between the wars, buying precious stones in London and Paris, and designing custom jewellery. He supported the American WWII war effort, and after the War was a friend and jeweller to President Kennedy, and the Kennedy family.

It's interesting that this piece is made in palladium. During WWII platinum was a strategic metal, prohibited for jewellery use, and palladium was used as a substitute for platinum well into the 1950's. No doubt this was the reason Queen Elizabeth II's opal necklace was also made in palladium.

So this pearl, opal, and diamond bracelet will date from the 50's to early 60's, possibly from the glamorous but unfortunately brief "Camelot" period during Kennedy's presidency.

It's a rare and interesting survivor as an example of South Australian opal that reached the American market.