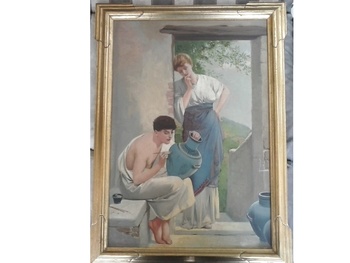 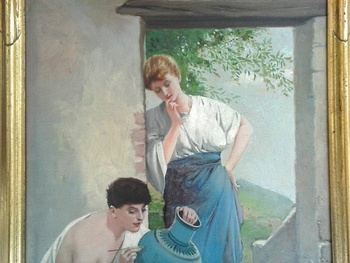 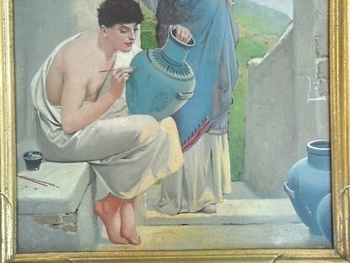 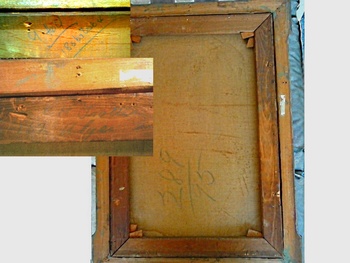 My jaw about dropped to the ground when I saw this in the picture stacks at Salvation this morning. Right on the floor too where it could be easily kicked and damaged. Out came the loupe..yep it's the real thing ! I would say it's a mix of Pre- Raphaelite or Arts and Craft in style for lack of a better term but late 19th century for sure. I love the subject, colors and the way it's been executed. The back was covered with a large white piece of artist's canvas with cardboard under that and stapled to the stretcher as a dust cover. That had to go since it looked like it was recently done and I think the painting will be able to breath now that it's open again. Removing that revealed a really old and darkened wood stretcher and aged canvas. There are a lot of numbers and a name C.H. Trotter (?) written in pencil on the wood. I think that may be the framer's or art supplier's name and not the artist's but you never know. There's also a partial address under that. When light shines through it from the back you can see some of the sketching and under painting from the front almost like an x-ray. The painting itself is very bright and only has a few surface abrasions a miniscule tear hidden in the folds of the potters robe. The painting has been attached to the frame (maybe the original) with some really small modern nails which I would have to dig out in order to remove it from the frame and check it for a signature. For now that remains a mystery and I don't want to damage anything, but I think this might be something rather special. The research continues..... -Mike-