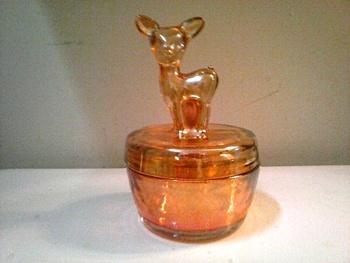 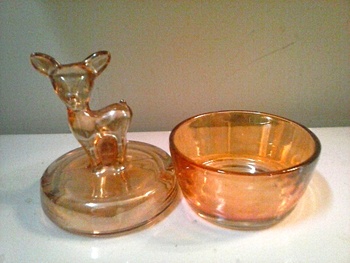 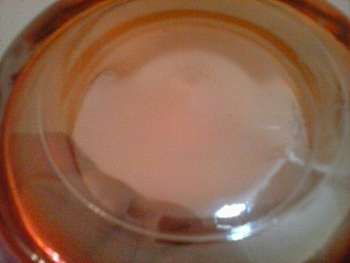 Here's a nice little 6" powder or trinket jar from Salvation this morning. I had seen the top days before, but not the bottom. Today I found the bottom half with it's touch of powder in another section and viola'...a complete jar ! Both priced separately and almost given to me for a mere fifty two (tax) cents. Made by the Jeannette Glass Co. in Jeanette PA. This cute fawn is done in a color of Carnival glass known as Marigold. At times the color shifts so much between the top and bottom it looks like it doesn't match. The lid has a lip on it that fits securely to the base without sliding off . Cute little guy from the 30's or 40's. -Mike-

The Jeannette Bottle Works Company was founded in 1887 in Jeannette, Pennsylvania. At this time in their history they only produced handmade bottles.
In 1899, Jeannette Bottle Works joined the machine age and became the Jeannette Glass Company. With the new machinery (O'Neil semi-automatic bottle blowing machine), Jeannette Glass was soon producing canning jars, relish jars and automobile headlight lenses.
Jeannette Glass continued to expand and by 1904, they added medical supplies and household items to their production line.
In the early 1920s, new machinery was added and Jeannette Glass began producing tableware items. This cheaply made and brightly colored tableware became known as Depression Glass and is highly collectible today.
In 1961, the Jeannette Glass Company acquired the old McKee Glass factory which was also located in Jeannette, Pennsylvania. Together they produced many beautiful glass patterns until 1983. Due to a failing American market, Jeannette Glass shut down in 1983.

Tiffany made the first iridized art glass. Their formula was EXPENSIVE. The iridization was in the glass mixture, not sprayed on the glass. Fenton came up with a cheaper way of making iridized art glass and introduced their line of "imitation" Tiffany glass in Oct of 1907. It was an instant success and other companies such as Northwood, Dugan, Imperial and Millersburg soon followed Fenton's lead. Carnival glass was in its heyday from about 1908 to 1920. Tiffany was not too happy about it. One well to do lady said it best, "When the maid can afford similar glass, I don't want it."
The industrial revolution hit the glass industry in the early 1920's. Companies like Jeannette and Indiana switched to machinery instead of hand presses. They could crank out nearly 50 ton of glass daily even back then. The economy was going downhill...............stock market crash and then the depression. A great many of the hand made glass companies went under. The first depression glass patterns came out in the mid 1920's and kind of took over. They were CHEAP and very colorful machine made glass.
So what to do with all the warehouses full of iridized glass? Americans no longer wanted it. The overseas markets were drying up too. So most of it was sold to the traveling carnivals for pennies on the dollar to be used as game prizes, thus the name Carnival Glass.
FYI: The traveling carnivals actually did well in the depressed 1930's and difficult World War II times of the 1940's. No matter how broke folks were, they always found the money for some entertainment. When the traveling carnival hit town, out came the stashed coins. Every guy took his best girl and tried to win her a piece of "fancy glass". And those memories and treasures were admired and then tucked away. If a piece of carnival glass could talk, oh what a story it would have to tell!