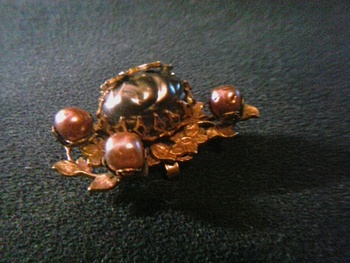 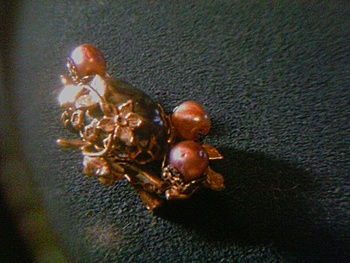 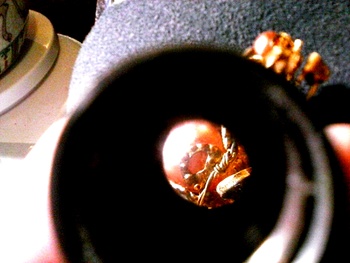 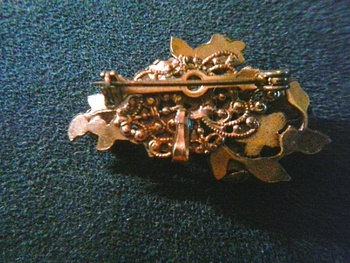 Savers turned out to be a gold mine today. At the jewelry counter I found this little 1.5 " gem. My thoughts are... that I'm almost 99.9% sure it's an unsigned piece of Miriam Haskell from the 40's to the 50's possibly earlier. It has all of the hand made construction characteristics of early Miriam Haskell. The beautiful gold-tone filigree work, the renaissance shape, the large central faux black baroque pearl. Hand wired to an intricate filigree backing with a bale to convert it to a pendant. You can see the pink pearls have been drilled through and wire mounted to their settings so that not just the prongs are holding them in place. No glue has been used. The foliage back ground looks identical to some of her other pieces. This pin has a small bale on the back. It looks like they were used mostly as add-ons to a strand of pearls or even a pearl choker as an embellishment.
-Mike-

Miriam Haskell (July 1, 1899 – July 14, 1981) was an American designer of costume jewelry. With creative partner Frank Hess, she designed affordable pieces from 1920 through the 1960s. Her vintage items are eagerly collected and her namesake company continues. She is known for the collectible, vintage designs the studio has been manufacturing since 1926 in their New York City boutique. Creating couture fashion jewelry for the high-society women of New York, Miriam quickly became a favorite designer of Coco Chanel, Joan Crawford, and Jackie Kennedy. Each piece of jewelry is created by hand and crafted with meticulous detail. Some even taking as long as three days to complete. Crystals, beads, and pearls are hand-picked, wired to an intricate brass filigree backing, and backed to a second filigree to conceal construction.
Some of the best and most collectible Miriam Haskell jewelry was made in the first decades when Frank Hess was her head designer. Frank Hess was the head designer from about 1926 to 1960 and his talent is unrivaled. In the early days of Haskell they put no identifying marks on their jewelry at all. As a mater of fact it was not marked until about 1947. Today the early unsigned pieces can be identified from vintage art work and advertisements, and by their wonderful detail, hand work and design.