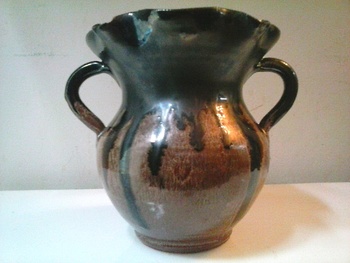 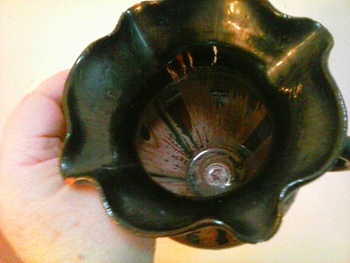 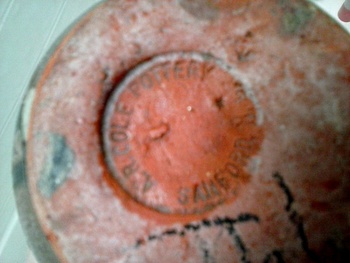 Picked this up from Volunteer's of America today. I'm familiar with A. R. Cole's pottery but I've never seen let alone owned a piece before. I know large pieces of Cole pottery can command equally large sums. This being a rather small example it still has a lot going on. Nice shape, handles, and a ruffle top. All coated in a dark brown drip glaze that turns almost a copper metallic color as it continues down the body of the piece. Even the interior has the same beautiful drip pattern. Three small nicks to the ruffle top are the only flaws. Not sure of the date it could be mid-century or earlier. I'm sure the stamp in the red clay bottom is the key to dating these I just haven't found the right resource yet. -Mike-

Arthur Ray (A. R.) Cole (born 1892 - died 1974) operated his first pottery shop in 1926 in Steeds, North Carolina (near Seagrove), but in 1934 opened Rainbow Pottery in Sanford, NC to be on the main North-South highway at the time, US 1. In 1941, he began operating as A. R. Cole Pottery of Sanford. The Cole family is among the most prominent in North Carolina pottery history and among the pioneers of the North Carolina art pottery movement. A. R. Cole was the son of the potter Ruffin Cole and the nephew of potters Wrenn Cole and the well-known J. B. Cole. Following A. R. Cole's death in 1974, the pottery continued to operate under the control of his daughters Neolia and Celia, who were already established as highly skilled potters in their father's pottery at that time.