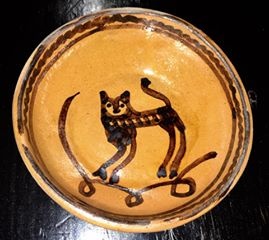 i was very bummed that this piece got broken in my suitcase - returning from Mexico the other day. i glued it, but it's not very good. The cat-like creature is a Nahual - according to Wikipedia, a Nagual or Nahual is: In Mesoamerican folk religion, a nagual or nahual (both pronounced [na'wal]) is a human being who has the power to transform either spiritually or physically into an animal form: most commonly jaguar and puma but also other animals such as a donkeys, birds, or dogs and coyotes.[1]

Such a nagual is believed to use their powers for good or evil according to their personality.[2] Specific beliefs vary, but the general concept of nagualism is pan-Mesoamerican. Nagualism is linked with pre-Columbian shamanistic practices through Preclassic Olmec depictions which are interpreted as human beings transforming themselves into animals. The system is linked with the Mesoamerican calendrical system, used for divination rituals. The birth date often determines if a person will be a nagual. Mesoamerican belief in tonalism, wherein every person has an animal counterpart to which his life force is linked, is also part of the definition of nagualism.[2][3] In English the word is often translated as "transforming witch", but translations without the negative connotations of the word witch would be "transforming trickster" or "shape shifter".[1]