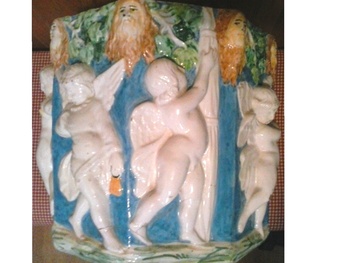 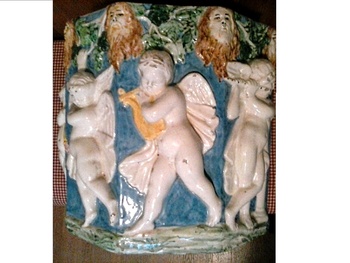 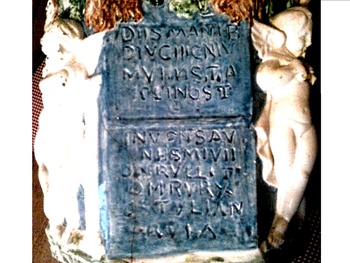 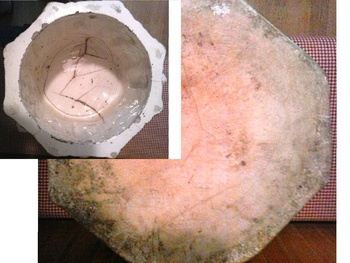 I stopped into our local Salvation Army the other day. This isn't the big modern one I usually go to and it's much older too. They just started a very odd way of selling everything....by the pound. Nothing has an individual price. All clothes are $1.49 a lb. and everything else is .49 cents a lb. except furniture. I found a nice brass foyer light fixture and this planter...total cost for both $9.18 ! I figured they both weighed about the same as this 10" planter is heavy Majolica so about 5 lbs. each. It's just beautiful in detail and color but man it's had a rough life. Hairline cracks galore which made me hesitate buying it but even so I just had to rescue it. I knew I'd kick myself later if I left it behind. The cracks are not really that visible except on the interior but I don't know what's holding this piece together ! Very Della Robbia in style, it has eight sides with bas-relief of Roman Putti playing instruments and one panel has Latin text incised into it. I tried to get a clear enough picture so if anyone is able to translate it that would be great. Some glaze damage on the the high spots of the putti have caused dark spots to the white ceramic. No maker's marks or labels anywhere. Possibly Italian or even French. Still. it's amazing to look at despite it's flaws. -Mike- 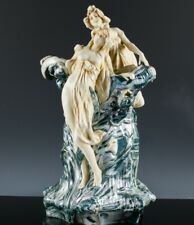 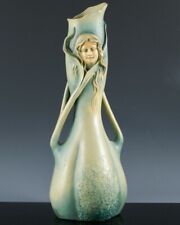