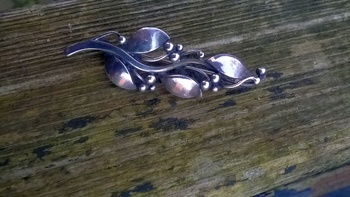 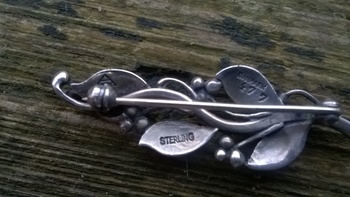 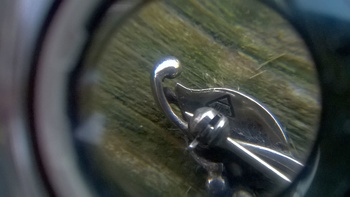 I've never found any jewelry from Just Anderson. I have posted here a bronze Genie lamp by Just Andersen. Those are relatively easy to find. I only found one other brooch like this one listed on eBay. Just Andersen is known mainly for his designs in bronze and pewter. Finding a signed piece of sterling silver is somewhat of a rarity.

"ANDERSEN, Just , (Just A)
Just Andersen started making jewellery In his own workshop in 1918, having received a kickstart from Mogens Ballin with a 3 year project to decorate an altar in Copenhagen. He produced beautiful figural sculptures in gold as pieces of jewellery, but they were of course very expensive, and so he also started working in silver and pewter and "Disko", an alloy which he discovered himself. His pewter hollowware from that period commands very high prices today.
At the end of the 1920s, Just Andersen started to move from individual ‘unica' pieces to a more streamlined production method, collaborating with a Swedish goldsmith and introducing pieces inspired by the simple forms of Nordic pre-historic jewellery. (Source: Jacob Thage, Danish Jewellery, 1990)
Just Andersen died in 1943, but his workshop continued under the management of his widow and Ellen Schlanbusch (1902-2005) who worked for the company for a total of 50 years, and who became artistic director. Karen Strand, Arje Griegst and Jane Wiberg were all apprentices in the post-war period. The company closed in 1973. (Source:Vibeke Marssoe) ."

Thanks for coming by!
Bonnie