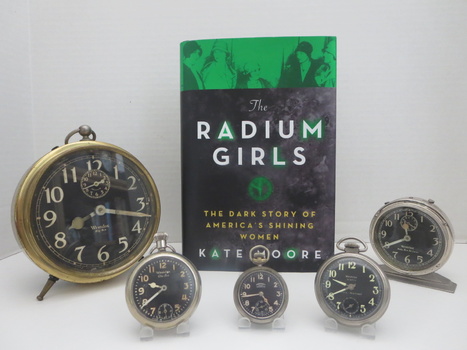 The Radium Girls, by Kate Moore is a new book telling the history of the young girls that worked in the clock & watch dial factories such as the Radium Luminous Materials Corporation, Luminite Corporation, United States Radium Corporation, Radium Dial Company, & others in the early 1900's. She tells how the girls were taught "lip pointing" using slim camel-hair brushes with narrow wooden handles. They would the brushes in their mouth to moisten the brush and "point" the bristles between their lower teeth and lips, dip it in the paint with a minuscule amount of radium and paint the numbers on the dials. This process was repeated several times while painting a dial. They were paid an average of 1.5 cents per dial. The average dial painter would take home an average of $20.00 per week, the fastest painters could double that.
The sad part of this story is that they were not informed of the medical dangers of the poison in radium, and a vast number of them died a painful and horrible death.
On page 55, it tells how the new girls started out painting the large (approximately 10 centimeters across) Westclox Big Ben clock dials. with a little experience on these, they would then moved on to the Baby Ben dials (about half the size), and eventually to the pocket watches: the Pocket Ben and the Scotty, which were about 3 centimeters wide.
In the photo shown of the book, The Radium Girls, to the left is a Westclox Big Ben, at the right is a Westclox Baby Ben, the pocket watches, left front is
is a Westclox Pocket Ben (named Glo-Ben), & on the right is a Westclox Scotty. I added in the center an Ingersoll Midget Radiolite to show the smaller pocket watch. All of these still glow in the dark.
A sad story of how these mis-informed girls, (either unintentionally or intentionally) sacrificed their health and sometimes early lives, so someone could make a huge profit.
Thanks for taking the time to read my long post, but some history of clock & watch manufacturing that needed to be told.