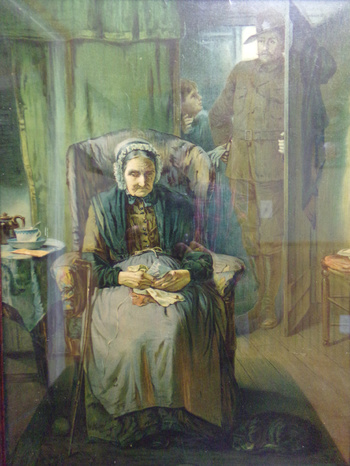 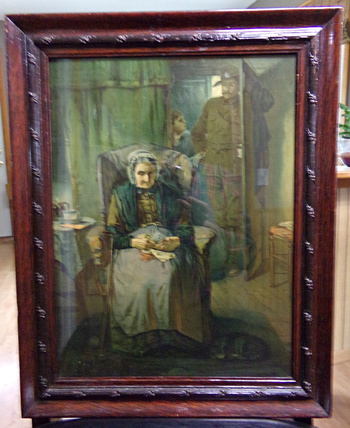 This story is based off this antique litho I found last week at a thrift store. It had been beloved by someone, as its frame had been worked on and the backing professionally redone, but water-damage had occurred sometime after that and it was donated. If you can, you will see that his hat's badge says Canada on it. As such, I assume Canadian military. Unidentified.

The high, wing-backed chair's colours had become muted over the years due to just how many people had sat in it. The fabric was becoming worn, faded, and torn. She'd remembered it from when she was just a girl. Like her, it had seen many people come and go in its time. Her dear and long-departed parents, her Gone-Home-to-God husband, her child that once nursed at her breast, friends who had all gone on to Glory, close and distant relatives, darling pets..... Even a few strangers had sat in it over the decades.
The wood under where its tall legs sat had become somewhat gouged by the castors added some years ago. That chair was one of the few constants in her life. The world was changing so much, so quickly. She remembered her first hearing an aunt on the other side of a telephone. She remembered electrical lines reaching her childhood home and those first bare, dim bulbs hanging from cords fastened to the ceiling. She remembered the first strange, loud beasts of iron and wood shaped like sleighs-- and, later, more stylish enclosed versions of 'auto' bouncing along rutty streets. She remembered her parents passing within just a few months of each other, just after she had gotten married. And she remembered her husband's slow death by Consumption when her only child was just a few years old.
Now here she was in that constant, her back hunched forward from poor posture and the crippling effects of age, her being surrounded by muted colours that had faded like flowers with age. And like the heavy drapes now over the window of warped glass looking out at the changing world, her soul was heavy with burden. Her servant-girl had a few days earlier delivered to her a letter. The old woman's soft, pleasant smile toward the youth faded when she saw that it was sent by the army. Her heart sank like a stone and tears suddenly flooded the ducts in the corners of her eyes as she realised what it was. She couldn't bare to open it. Her time-worn face became more haggard as her spirit broke within.
With arthritic and shaking hand, she placed it on the covered side-table beside her; and there it sat for two days, unopened-- she was unable to open it. She couldn't bear another loss. She couldn't bear to verify that her son had indeed been killed-- the very thing she had every night begged God to prevent. She couldn't bare to be the last one alive in her family-- a frail, old, lonely woman. She couldn't bare it... and she weeped both nights, dragged down by deep sorrow.
After two days she got dressed and sat back down in that constant. She decided to attempt cross-stitching.... something. She knew not what. What could she do? What could she make? Her only child had been killed in a bloody war-- the same bloody war that every day was claiming hundreds of lives for.... for what? The world of many mothers and wives was crashing down daily with every letter the army sent out. Souls were heavy and spirits were low throughout the nations now left fatherless and with dim futures bathed in blood.
The ball of yarn fell to the hard floor as she gazed downward, eyes unseeing, mind deep in sorrow-filled thought; the cat that was sleeping next to her foot stirred to tiredly eye the ball and, in his old age, went back to sleep.
Oh, how lovely sleep would be.... eternal sleep.... the only rest for her worn body, mind, and spirit. In her hand, she gently pinched the needle and material she was going to stitch as she continued to be crushed by hopelessness and loss.
Just then, the door opened. Her weakening ears and exhausted mind didn't hear it creak on old hinges, for she was too far gone in her depression. Even if she had heard it, she'd not have moved a muscle. But with some hurry, the servant-girl motioned the man inside the doorway. He had some concern, having heard upon arriving home about the condition on his mother. Neither of them knew what was the matter. At the house door, he told the girl that his term of service had ended and that he had the army mail his discharge papers directly home to his mother. He thought his mother would be over-joyed at the soon return of her beloved son!
So with some trepidation he stepped in slowly, hoping not to scare his stricken mother. And there he saw her leaned forward in her chair, quiet, still. A board creaked under his boots, and a dim awareness of someone's presence came into the old woman's mind.