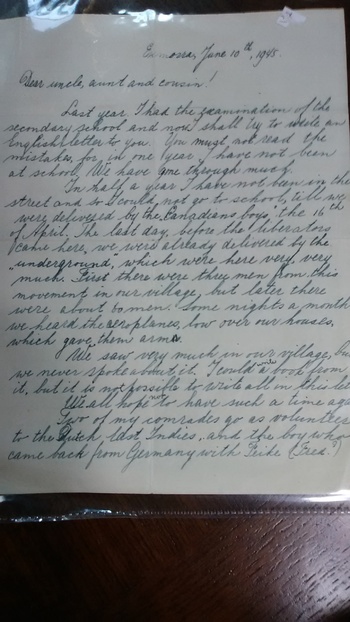 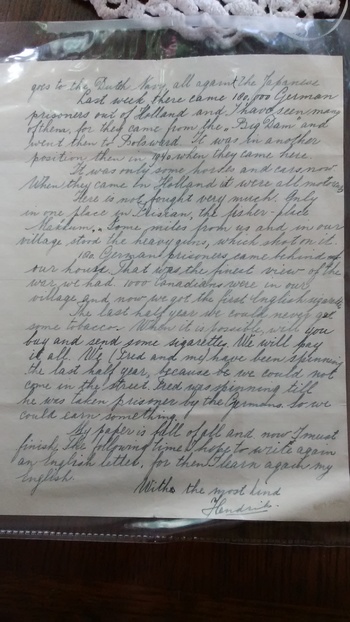 This letter is pretty interesting, though vague and lacking in war content. A teen (I'm assuming, as he was in Secondary School till the year prior to this letter, who tells of how he couldn't go out in the street anymore) writes to extended family in America on how he has just been "delivered" by the Canadian Army as they passed through his village, escorting German prisoners passed his house. I have typed it up as per his spelling and grammar.

As he was in Secondary School, he may still be alive today. Wouldn't it be wonderful to find him? To talk to him and have his story added with this letter!

If anyone can fill in the brackets [ ], as I couldn't be sure of what the word was in those, I would greatly appreciate it. And if any of our Dutch friends know of the village and can send this to the historical society there, to look for Hendrik, that would be fantastic.

Last year I had the examination of the secondary school and now I shall try to write an English letter to you. You must not read the mistakes, for in one year I have not been at school. We have gone through much.

In half a year I have not been in the street and so I could not go to school, till we were delivered by the ,,Canadian boys", the 16th of April. The last day, before the liberators came here, we were already delivered by the ,,underground", which were here very, very much. First there were three men from this movement in our village, but later there were about 60 men. Some nights a month we heard the aeroplanes, low over our houses, which gave them arms.

We saw very much in our village. but we never spoke about it. I could write a book from it, but it is not possible to write all in this letter.
We all hope not to have such a time again.

Two of my comrades go as volunteer to the Dutch East Indies, and the boy who came back from Germany with [Feike??] (Fred?) goes to the Dutch Navy, all against the Japanese.

Last week there came 100,000 German prisoners out of Holland and I have seen many of them, for they came back from the ,,Big Dam" and went then to [Bolsward?]. It was in another position then in 1940 when they came here.

It was only some horses and [cars now?]. When they came in Holland it were all [motorcars?].

Here is not fought very much. Only in one place in [??isian], the fisher-place [Haklum?]., Some miles from us and in our village stood the heavy guns, which shot on it.

[1070?] German prisoners came behind of our house. That was the finest view of the war we had. 1000 Canadians were in our village and now we got the first English segarette.

The last half year we could never get some tobacco. When it is possible, will you buy and send some segarettes. We will pay it all. We (Fred and me) have been spinning the last half year, because we could not come in the street. Fred was spinning till he was taken prisoner by the Germans. So we could earn something.

My paper is full of all and now I must finish. The following time I hope to write again an English letter, for then I learn again my English.

With the most kind