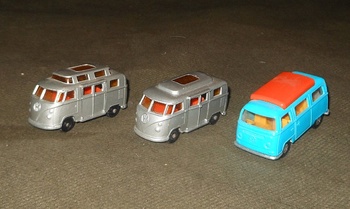 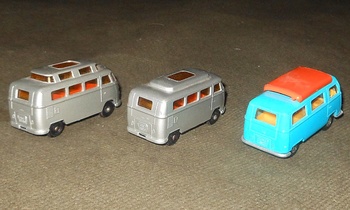 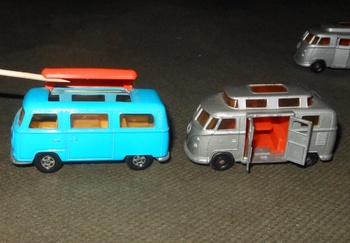 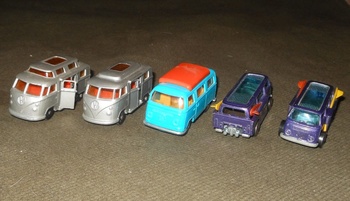 I was going to give Matchbox Monday the day off but I just couldn't. I was going to post the 6 Wheel Crane but decided to go with this. This being a trio of Matchbox vans.
Starting off with the Volkswagen Camper MB 34C which was made from 1967-1968. It featured a raised roof with windows.
In 1969 the windows were removed and the roof lowered a bit. Probably due to production problems. It happens now and then. This version is known by some as the 34D although they may be some argument over this being a new casting. May involve violence and name calling. This was made for only 1969-0970.
In 1970 an all new version was made with Superfast wheels. It has a fully detailed interior. The previous ones only had the dining area, although they did have nifty opening side doors. The plastic opening roof in this one opens a bit to reveal the interior. This one was the MB23 in the catalog from 1970-1977.
Wrapping it up is a special guest appearance by the Hot Wheels Beach Bombs. I think the 34D is closest to the traditional VW Van.