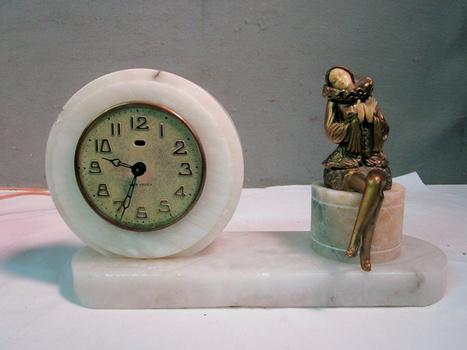 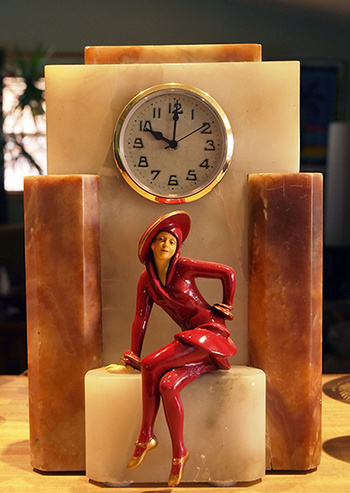 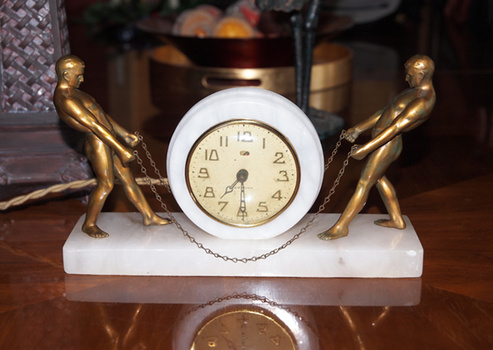 These clocks do not appear in Tran Dy Ly's book, "New Haven Clocks and Watches". Which catalogs every clock and movements manufactured by the New Haven clock company. New Haven did manufacture figural mantle clock but these clocks are not among them. The alabaster on each of these clocks has "Italy" scratched on the bottom, Hirsch imported alabaster and figures from Europe before and after WWI, later he would buy molds for the figures and manufacture them in the USA, it wasn't until after WWII that his son Abraham went to Europe and salvaged molds. Each of these figures are well documented as Hirsch's except for the clock with the men, it was attributed to his company but was confirmed when the Hirsch company released its Three and Two Strongmen table lamps in 2017, both models can be seen here
https://www.wayfair.com/lighting/pdp/three-strongmen-francais-18-table-lamp-jkb1232.html
and here
https://www.wayfair.com/lighting/pdp/two-strongmen-francaise-18-table-lamp-jkb1231.html
These strongmen did not appear in the original Francaise Collection.

Picture 1 Harlequin clock white alabaster
Picture 2. Sophisticated lady clock white and brown alabaster.
Picture 3. Servant of Time while alabaster, this same item was released with a light in the center where the clock is in this one. 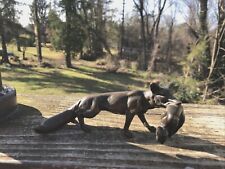