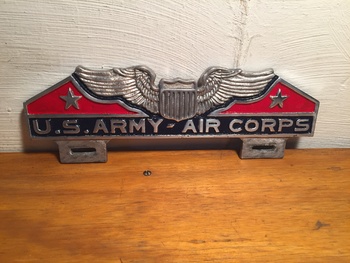 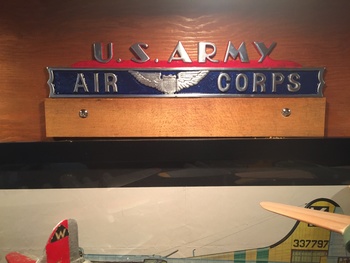 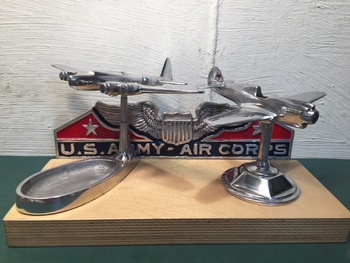 A good friend clued me in on these collectibles, License Plate "Toppers". These were produced as marketing pieces and meant to be bolted onto the automobile using the same bolts that attach the license plate to the license bracket. These were great fun until auto manufacturers began making cavities for the license plate and these add-ons no longer would fit.

Today these can be collected and displayed as mementos of bygone, romantic times. There were two basic types, painted sheet steel plates and cast aluminum plates. The second is intriguing for me as the aluminum can be polished and painted much like the vintage models I handle. The pair shown are both cast aluminum units featuring the pre-war US Army Air Corps. Both units have been restored to their original appearance and now can be mounted to be used in displaying vintage models. The third picture shows the license plate topper re-purposed as a integral part of a pre-war AAC model display. It has been mounted with two vintage pre-war models staged in front. Note that the model on right (XP-40) is waiting on a new prop assembly and canopy.