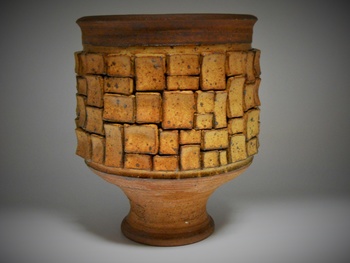 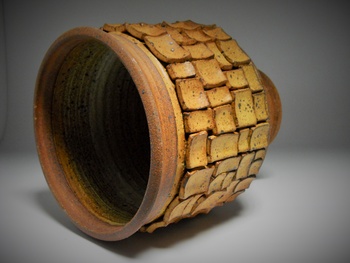 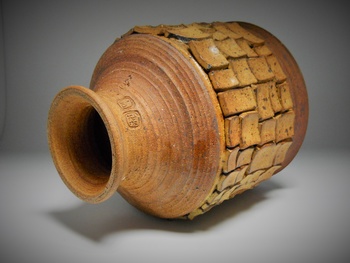 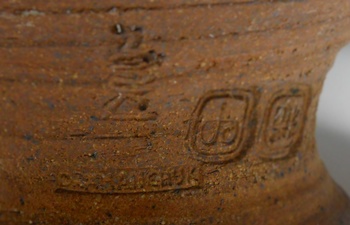 Hello Everyone.
Good Evening from Ontario.2018-05-6
This week-end i was off from work, working in my garden, Yesterday and today, mid day today, i decide to take few hours break till Garage sale I start over again for the summer, i notice in my area few sign on street post, so i go hunting confident i will find some Brooch or nice piece of glass,humm, nada both, but i found a very nice Canadian Studio Vase, made by " Ed Drahanchuk" well know Artist.
Very complex piece, unusual shape, made on a turn table, dozen of small little square in different size applied on the wide part of the vase, tiny base and a wide rim.
2 small square Mark plus " Drahanchuk " Picture #4

Drahanchuk was oriented to an honest expression of the natural world. He used glazes as ‘accents to good design only where function demands.” Whether making a studio piece or a commissioned mural, Drahanchuk imbued his work with a distinctive surface energy and muscularity, hallmarks that make it instantly recognizable. He worked in stoneware and experimented with relief decoration and wax emulsion, which provided a fine sensitive line in his work.

Ed Drahanchuk ran a successful independent studio practice (Design Associates, est. 1963) in cooperation with his wife, Ethel, and architectural sculptor Bob Oldrich. They began the studio in Calgary, moved to Bragg Creek and then in 1975 moved to British Columbia. The studio is still in operation. Over the years the Studio benefited from involvement with Government sponsored trade shows in various parts of the world, which led to purchases from Canadian embassies and government buildings as well as ceramic orders from Europe and Japan. In 1974 Drahanchuk received the “Canadian Design of Merit Citation, Craft Award” from the National Design Council.

Drahanchuk was born in Calgary and graduated from the Provincial Institute of Technology & Art (now Alberta College of Art & Design), where he had studied under his older brother, Walter Drohan RCA (1932-2007), in a department heavily influenced by its first instructor Luke Lindoe RCA (1913-2000).