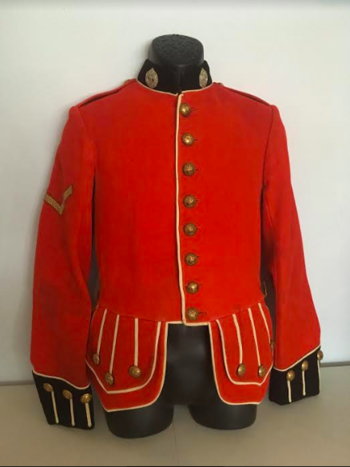 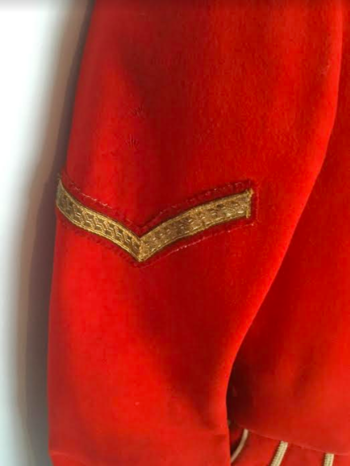 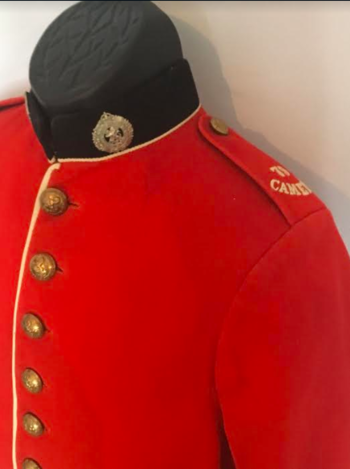 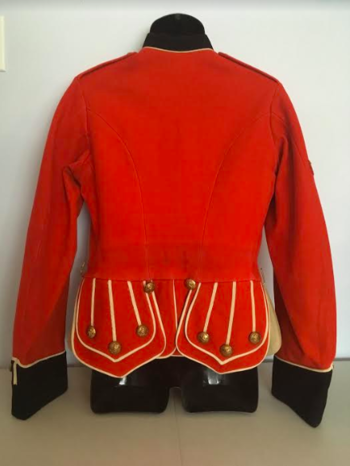 A rare and nice full dress doublet to the 79th Cameron Highlanders of Canada, which were based in Winnipeg. The doublet sports 28 regimental 79th regiment buttons. To one arm is a single gold rank chevron, indicating the rank of Lance-Corporal. Cuffs and pocket flaps all in good condition overall. Cuffs and collars have royal blue facings as the 79th had a royal designation. To the collars, one 79th King's Crown collar badge to each side, both in nice condition and appear to be original to the tunic. To the shoulders, embroidered "79 CAMERON" shoulder titles.

Interior also in great overall condition, with some markings, although the tunic is unfortunately not named, nor is it dated, although I would date this tunic to around 1910 period, probably worn up to WWI.

The 79th Cameron Highlanders were formed in 1910. As early as 1905, the local Scottish community in Winnipeg, led by the St Andrew's Society, began lobbying the government to raise a Highland regiment. Under increasing pressure from the Scottish lobbyists the government relented and the initial steps taken to form Western Canada's first Highland regiment. On 29 September 1909, the prospective officers met and committees dealing with finances, uniforms and the band were formed. As the government grant did not cover the entire cost of uniforms and equipment, the Scottish societies and the officers undertook to raise the money themselves managing an initial amount of $25,000.00. Almost all of the original accoutrements were manufactured in Scotland, obtained from William Anderson & Sons Ltd. On 1 February 1910, the 79th Cameron Highlanders of Canada were officially gazetted, headquartered in the former Dominion Lands Office at 202 Main Street. On 9 October 1910, the regiment received its first stand of Colours, presented by Mrs D. C. Cameron, wife of the honorary lieutenant-colonel.

The availability of the number "79" was fortuitous and enabled the new Canadian regiment to adopt the regimental number of a famous regiment in Scotland, the Queen's Own Cameron Highlanders who had been raised in 1793 as the 79th (Cameron Highlanders) Regiment of Foot. Along with the regimental number the new Canadian regiment chose to also perpetuate the uniform of the Imperial Camerons. This association with the Queen's Own Cameron Highlanders became official on 31 January 1911, when His Majesty, King George V authorized the alliance of the two Highland regiments. On 22 June 1911, a contingent of 61 Camerons, parading with their allied regiment, participated in the coronation of King George V.

My Great-Grandfather, who would become a Sergeant with the 8th Battalion (90th Winnipeg Rifles) CEF in WWI, served as a Private with the 79th prior to the outbreak of WWI, and would have worn this very type of uniform, minus the Lance-Corporal's rank chevron. He began serving with the regiment around 1911, I believe.