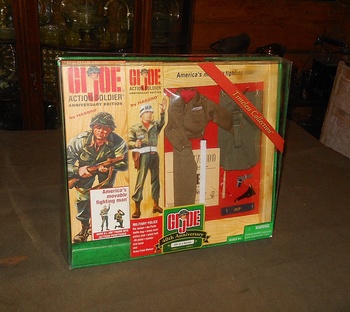 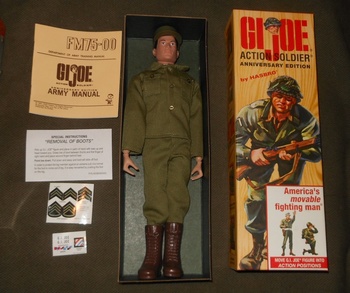 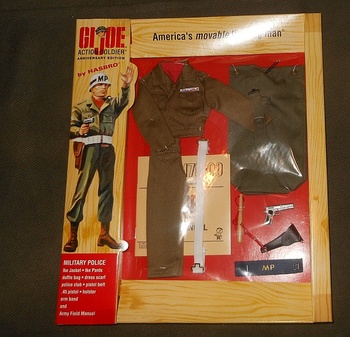 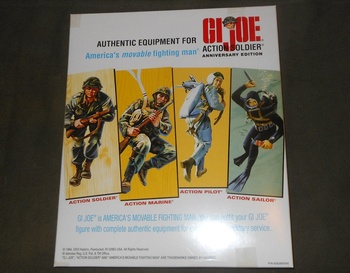 Of all the reissue sets the GI Joe 40th anniversary sets are my favorite. They are faithful reproductions of the original sets made for GI Joe in 1964. There were 29 sets released (I think I missed a few). 23 were in general release at retail stores and the other 6 were club exclusives. These are so good they caused the price of vintage GI Joes to go down. Not only did they have the uniform/equipment sets but each came with GI Joe in a reproduction box with the paperwork, manual and stickers that came with the originals. This one has the better shirt with chest pockets. Most had a more plain shirt.
As to this set it is the Military Police or MP set. It has the uniform with everything seen in photo #3, uniform, belt, pistol, armband, duffel bag but no helmet. Just as with the original the helmet was sold on a small card with a belt, pistol, holster which one already had with the MP uniform set but handy to have as the small pieces often got lost or broke. Hasbro did that with a few set. Some require 3 or 4 purchases to make a complete set.
Some people keep the entire sets together. Usually I open the whole thing but I like to have one of each the accessory packs as see in photo #3. The nice thing is that I might open up one of these if desperate for a piece and no big deal unlike an original carded set. I am not allowed to own the original carded sets due to my tendency to open them.