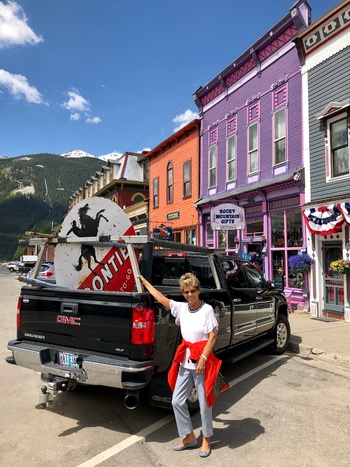 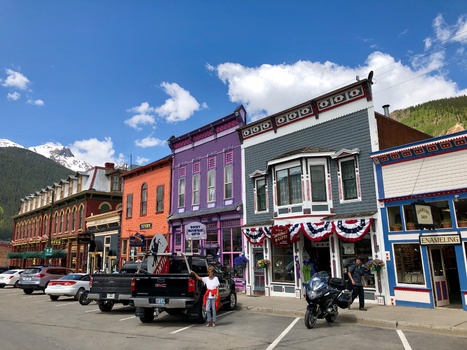 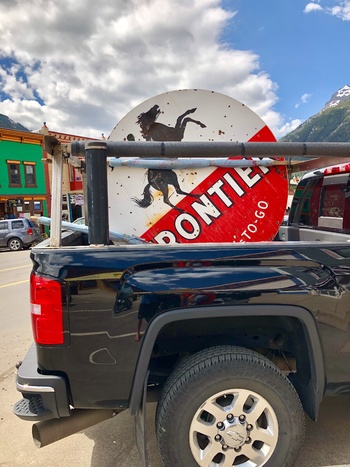 I spotted this rare Frontier sign on a Fence in nowhere Colorado about 3 years ago as we returned from Santa Fe New Mexico and called the owner regularly ever after to see if he would sell it to me. The answer was always the same: “No! It belonged to my father and was on his barn and has a special memory to me”!
As I was eating lunch at home with my wife three days ago I got a phone call from a guy who knew my name and said he was “Lyle from Colorado” and began talking like we were old friends. I, of course, was desperately trying to sift thru my memory and figure out who this Lyle might be. Suddenly he announced that he had decided to “let the sign go that I had been calling about”. When I asked which sign that might be, he responded that it was the Frontier sign on the fence in Gem Valley. The eating stopped and it was all business from that moment on, as you might imagine!!!
We quickly arrived at an agreeable price, based on the highest price a rich Texan had offered a year ago as he drove past, and within 30 minutes my wife and I have thrown a toothbrush in my truck and were off on a 740 mile jaunt to get this rare and impossible to find Frontier sign before he changed his mind. I love the thrill of finding Signs in the wild and the Lakeside Museum will shine with this one on a pole!
Most people don’t know that Frontier started as a Canadian Co in 1949 and came to the US in 1949 in a Denver based company.