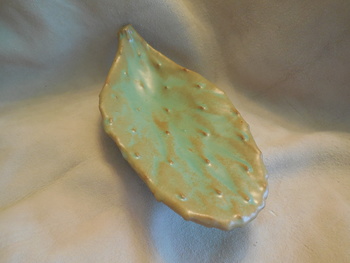 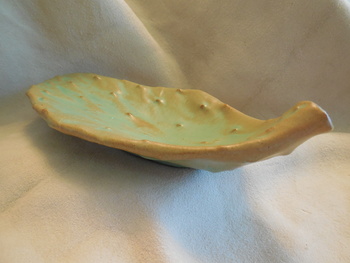 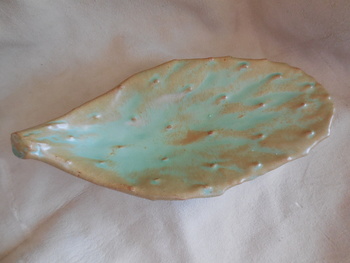 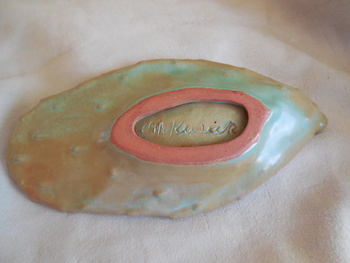 I found this Cactus Leaf Dish at the Flea Market, on Sunday 08/18/2019, and noticed that it was signed on the bottom in cursive McKusick. When I started to search McKusick Pottery, I found Tiles with Animals, or Native American Indian Designs, but the only Dishes had Tiles incorporated into them. The Tiles that were Signed looked very close to the Signed Mark on the bottom of this Cactus Dish. The Dish is 8 1/4"long x 4" at the widest point, and 2" to the top of the Stem Handle. It's two tone Green Brown Color is a Clear Gloss Green Glaze over the Red Clay, that then shows through, which gives it a realistic look! :^D
So I'm not sure if this Dish is made by Bob and Charmion McKusick's Gila Pottery of Tucson, Arizona, that was started in 1952-54, and then after a move to Globe Arizona started McKusick Mosaic and Tile Company, and sold their work at the Desert House of Crafts. They ran their Pottery for 47 years, and their children continued it.
Bob McKusick lost his left hand, and part of his arm, while engineering explosives, and learned his Craft after. He died on June 20th 2016.

Thank you for looking, all comments are welcome, and any information on this Dish is appreciated! :^) 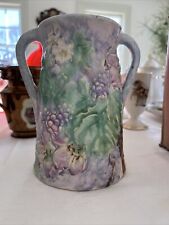